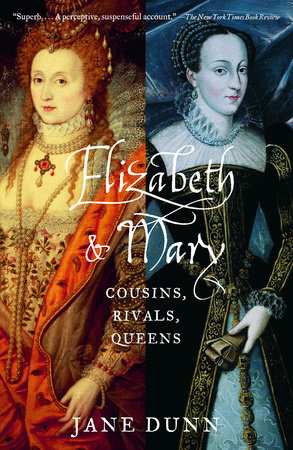 The introduction, discussion questions, suggestions for further reading, and author biography in this guide are intended to enhance your group’s discussion of Elizabeth and Mary: Cousins, Rivals, Queens, Jane Dunn’s fascinating portrait of two powerful women—their tumultuous relationship with each other and its profound effect on their private lives, public images, and historical legacies.


1. When Elizabeth became England’s queen at the age of twenty-four, “She had already been bastardised, disinherited, often in danger and always waiting, never certain of the prize” [pp. 5–6]. How did this difficult background prepare Elizabeth for her reign? Why was the English public so ready to accept her? What lessons did she learn from the disastrous rule of her half-sister, Mary I, and how did she exploit them even as she ascended to the throne?

2. Mary “had grown up with an unwavering sense of destiny and a natural flair for the theatrical; she knew what was expected of her and to what she had been born” [p. 10]. How did her childhood in the French court and her marriage to the Dauphin reinforce Mary’s perception of herself? How did it affect the way she ruled as queen of Scotland?

3. In comparing Elizabeth and Mary as young women, Dunn writes, “Fifteen was not considered as youthful then as it is to modern minds. Fifteen-year-olds were leading men into battle, having children and dying for their beliefs” [p. 14]. Discuss the implications of this on the way both queens were treated by their advisors and perceived by the general public. Why have our assumptions about the capabilities of adolescents changed since the sixteenth century? Is this universally true, or are there societies or cultures that mirror the world Elizabeth and Mary inhabited?

4. In explaining her decision not to marry, Elizabeth stressed that “her subjects represented all the family she would ever need” [p. 176]. What other factors may have played a part in her decision to remain unmarried? In what ways did the conditions of life for women in the sixteenth century shape her views on marriage and motherhood? To what extent did the marriages in her family, as well as her own experiences (including her confusing, sexually charged relationship with Lord Seymour as an adolescent [p. 73]) contribute to her aversion to marriage?

5. During her formative years, Mary was surrounded by powerful women, from her grandmother, the Duchesse de Guise, to her mother-in-law, Catherine de Medici. Elizabeth, deprived of female role models as a child, looked to her father as an example of defining herself and her role in the world. Does this help to explain not just the differences between the two, but also their inability to form a true friendship?

6. Elizabeth created “an androgynous identity which gave her a unique protean power” [p. 107]. What qualities traditionally associated with womanhood strengthened her position and her power? Did these very qualities ever undermine her actions or decisions?

7. Mary is depicted as a vital, seductively charming but impulsive and temperamental woman. Is there credible evidence—in Mary’s communications with Elizabeth and others, in her erratic, inconsistent exercise of power, and in her disastrous marriages to Darnley and Bothwell—that she was manic-depressive as Dunn suggests [p. 255]? How do Dunn’s interpretations of Mary’s behavior differ from those of Mary’s contemporaries, and what elements do they share? Are there dangers in applying the insights of contemporary psychology to historical figures?

8. In discussing Elizabeth’s lifelong attachment to Dudley, a man much disliked and mistrusted by his fellow noblemen, Dunn writes, “Perhaps it was just that the male mind could not understand the attraction. . . . The detail and emphasis that comes down through history is filtered through male eyes and interpreted by masculine sensibilities” [p. 145]. Does Dunn shed new light on the reasons the relationship endured despite the malicious gossip and suspicions it provoked? Do her modern sensibilities color (and perhaps distort) her descriptions of Elizabeth’s and Dudley’s motivations and the feelings that bound them together?

9. For the royal families of Europe and Britain in the sixteenth century, marriage proposals were issued and marriages arranged for dynastic and political ends. How did Elizabeth manipulate this policy to enhance her country’s position in the world? Did her failure to secure the succession by marrying and having a child represent a serious dereliction of her duties as a monarch? What were the negative consequences of her actions, both during her reign and afterwards? What did she sacrifice and what did she gain in a personal sense by focusing on her public role?

10. The rivalry between the queens was played out against the religious upheavals of their times. What role did religion play in Elizabeth’s approach to governing? Were any of her actions or decisions based on religious convictions? For the most part, did Mary benefit from her allegiance to the Catholic Church? How did it weaken her position as Queen of Scotland and undermine her ambition to succeed to the English throne? Did her pro-Catholic stance reflect deep-seated devotion or a more worldly pragmatism?

11. Dunn calls the fact that Elizabeth and Mary never met “the black hole at the center of their relationship, the dramatic axis of their story” [p. 196]. What do Elizabeth’s and Mary’s letters, as well the conversations they had with advisors, ambassadors, and others, reveal about the personal prejudices they harbored about each other? Given the personalities of both queens, do you think that a face-to-face meeting would have alleviated or exacerbated their ill feelings, jealousy, and distrust?

12. Why was Elizabeth threatened by Mary’s power even during her imprisonment in England? How did the mythology surrounding Mary heighten the dangers to Elizabeth and her government?

13. After her involvement in the Babington plot was revealed, Mary “decided that she would stand on her unimpeachable sovereignty and die freely now as a martyr for her faith” [p. 390]. In what ways was Mary’s martyrdom a fitting end to the way she lived her life, from the personality traits she always exhibited to the legacy she was determined to create?

14. The decision to put Mary to death was extraordinarily difficult for Elizabeth. What did it reveal about her ability to balance her instinctive feelings and her understanding of political realities? What does Dunn mean when she says, “Elizabeth, until then the great equivocator, now made up her mind at last and through action transcended royalty to become an iconic queen” [p. 391]?

15. How would you characterize Dunn’s treatment of each queen? Does she seem to favor one over the other? What qualities does she admire? What negative traits does she seem to gloss over or excuse? Did the book change your previous impressions of Elizabeth and Mary?

16. In the author’s note, Dunn writes, “I come to this book as a biographer, not a historian, believing that character largely drives events, explains motivation, and connects us to each other through the centuries” [p. xxiii]. Does Elizabeth and Mary support this point of view? Are there events Dunn describes that contradict the idea of character-driven history?

17. How does Elizabeth and Mary differ from other biographies or histories you have read? Does Dunn’s focus on the “dynamic interaction” [p. xx] between the two queens illuminate aspects of their lives that might be obscured or ignored in a more traditional biography? Does Dunn present a fully rounded picture of the monarchs or does her approach limit her perspective and influence the incidents and events she chooses to chronicle?

18. England has had female rulers, from queens to a prime minister, but in twenty-first century America, where women have achieved positions of power in both the government and the private sector, why hasn’t there been a female president of the United States? What are the prejudices against women in positions of ultimate power, more than four centuries after Queen Elizabeth’s reign?