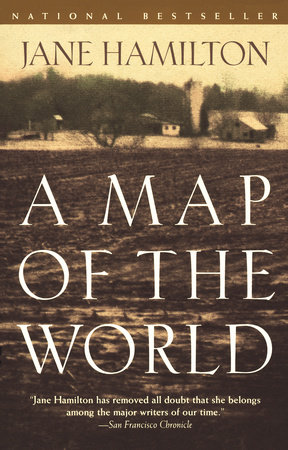 A Map of the World

1. In the opening pages of the novel, Alice says about her situation, "Now, in my more charitable moods, I wonder if our hardworking community members punished us for something as intangible as whimsy. We would not have felt eccentric in a northern city, but in Prairie Center we were perhaps outside the bounds of the collective imagination." (p. 4) How does the idea of alienation figure into the novel? Why do Dan and Theresa belong to Prairie Center? Does Howard belong? Feeling that she doesn't belong, could Alice have done anything to make herself less vulnerable to public censure?

2. Compare the different ways the characters grieve: Are there parallels in the husbandwife relationships within the couples--Alice and Howard, Theresa and Dan--and how each spouse expresses, or fails to express, his or her own grief? Do the characters' respective genders play a role in the way they deal with grief? What role does grief play in Howard's relationship with Theresa?

3. What is the function of Howard's narration? Does his perspective change your feelings about Alice and what happens to her? Is it clear why he doubts her?

4. Does Alice's sense of her own inadequacy contribute to how she is viewed by the people of Prairie Center? Does it contribute to Howard's feelings towards her?

5. At the outset of the novel, Alice says, "I had always suspected that Howard was able to slip into a phone booth, shed his rubber overalls right down to a blue body suit, and then take off into the sky, scooping up the children with one strong arm.... He has always been capable." (p. 9) What are some of Howard and Alice's respective strengths and weaknesses? Is either one stronger than the other in any way?

6. At the point of the novel when Alice is arrested, she is still completely overwhelmed and incapacitated by Lizzy's death and her role in it. How do the accusations against Alice and her time in prison change her and help her to deal with what happened to Lizzy?

7. What is revealed about Alice through her interaction with other prisoners? Does her sense of belonging shift while in prison? What new perspectives does she gain?

8. While in the jail hospital, Alice reflects on her marriage, "Lying in the hospital bed I thought to myself that my passion for Howard had soon been replaced by something that was stronger than respect, or habit, or maybe even need.... "I wasn't certain the group of feelings wouldn't cancel each other out, if any of them could possibly be powerful enough to carry me along by his side, shoulder to shoulder." (p. 298) What binds Alice and Howard? Do the events of the novel change the essence of those ties?