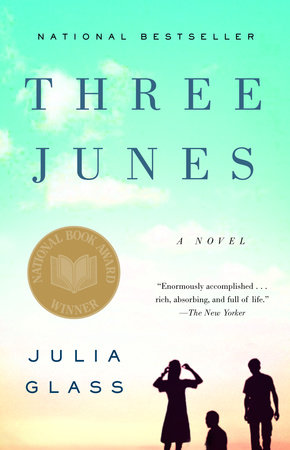 The introduction, discussion questions, suggestions for further reading, and author biography that follow are designed to enhance your group’s reading of Julia Glass’s Three Junes.


1. Julia Glass is also a painter. How do the style, structure, and descriptive passages of Three Junes reflect her artistic sensibility? How do the various segments, stories, and flashbacks work within the chronological text?

2. While traveling in Greece, Marjorie says she cannot stop “collecting worlds. . . . Different views, each representing a new window” [pp. 31–32]. How is the role of the traveler and observer like the role of the author?

3. Place figures crucially in the novel, whether it is a Greek island, a Scottish town, the West Village of New York City, or a Long Island town. What is the importance of each place and its role in the context of the entire novel? What are the symbolic differences between the countryside and the city? Where does Fenno belong?

4. The episodes in the first part, Paul’s vacation in Greece juxtaposed against the tale of his life in Scotland, come together to form a picture of his marriage with Maureen. Why does the author tell his tale in this fashion? Why is this part titled “Collies”?

5. Why does Paul, the steady shepherd of his family and newspaper, go to Greece first on vacation and then to live? Do you think he really wanted to “drop [his memories] like stones, one by one, in the sea” [p. 49]?

6. In the beginning, Fern reminds Paul of Maureen. Are the two alike or not? What are their similarities and differences? What does each want from life? How have Fern’s relationships affected her character and choices? Why hasn’t she told Stavros about her pregnancy? What is she afraid of?

7. Why doesn’t Fenno visit his father in Greece? What else has Fenno postponed doing or compromised for the sake of work or being upright? What consumes Fenno? What is the cause of the coolness between Fenno and his brother David? Is it rivalry? Do you think this coolness changes by the novel’s end? Which brother seems more admirable, and why?

8. What does the author accomplish by dividing the book into three parts with only the second as a first-person narrative? Why does she let Fenno tell his own story? What effect does this have on the reader? In addition, why does Fenno occasionally address the reader—for instance, when he says, “feeling left out, you will have noticed, is second nature to me” [p. 125]? Does this make us sympathetic to Fenno?

9. Part Two is titled “Upright.” Why? Is uprightness a positive or negative characteristic? Which characters are upright in the novel? Who is not?

10. What is the appeal of birds for Fenno and Mal? Fascinated by birds as an adolescent, Fenno covers the walls of his bookstore, named Plume, with bird prints. The dishes Mal breaks have birds on them. Felicity—Mal’s and then Fenno’s bird—is a vital character in the novel. Do birds and books have a special connection here?

11. What is the role of the mother in Three Junes? Has motherhood transformed or hindered Maureen? Do you think it will change Fern? How does Lucinda, the übermother, carry out her role? How about Véronique?

12. The novel teems with interconnected relationships. Describe some of them. Paul and Maureen—were they both satisfied in life? In marriage? Mal and Fenno—was their relationship ever fully actualized? Fenno and Tony—what kind of attraction did they share? Was it purely sexual? Tony and Fern—what brought them together? Fern and Stavros—will they stay together? Which is your favorite couple?

13. Tony’s job is “to take the very, very small and make it large. . . . Give stature to the details” [p. 277], which is also what the author does. Is Tony a compelling character in Three Junes? Is he simply a foil to Fenno and Fern? What is his purpose in the novel?

14. How does food—its smells, textures, and tastes—weave its way into all three parts of the novel? Why does the author vividly spell out the menus and recipes for us at all the critical meals? Which dishes are the most memorable?

15. What are the various views of death presented in Three Junes? How does the author view death? How do the characters in the novel accept or come to terms with death?

16. Anna explains to Fern, “When it comes to life, we spin our own yarn, and where we end up is really, in fact, where we always intended to be” [p. 286]. Glass ends her novel echoing this quote. Why? What do Anna’s words signify?