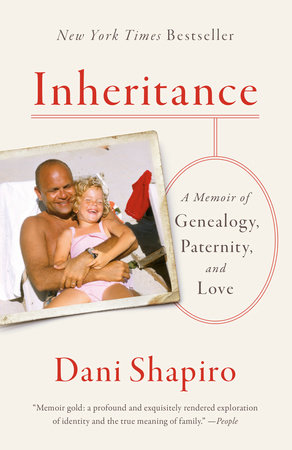 The questions, discussion topics, and reading list that follow are intended to enhance your reading group’s discussion of Inheritance, Dani Shapiro’s powerful exploration of what makes her who she is.


1. The title of this book is Inheritance. What does it mean, in the context of the memoir?

2. Shapiro chose two quotes for her epigraph, one from Sylvia Plath and the other from George Orwell. What do they mean individually, and how does each affect your understanding of the other?

3. “You’re still you,” Shapiro reminds herself. What does she mean by this?

5. Judaism is passed on from mother to child—the father’s religion holds no importance. So why does Shapiro’s sense of her own Jewishness rely so much on her father?

6. Chapter 7 opens with a discussion of the nature of identity. “What combination of memory, history, imagination, experience, subjectivity, genetic substance, and that ineffable thing called the soul makes us who we are?” Shapiro writes on page 27. What do you believe makes you, you?

7. Shapiro follows that passage with another provocative question: “Is who we are the same as who we believe ourselves to be?” What’s your opinion?

8. Identity is one major theme of the book. Another is the corrosive power of secrets. On page 35, Shapiro writes, “All my life I had known there was a secret. What I hadn’t known: the secret was me.” What might have changed if Shapiro had known her origins growing up?

9. On page 43, Shapiro quotes a Delmore Schwartz poem: “What am I now that I was then? / May memory restore again and again / The smallest color of the smallest day; / Time is the school in which we learn, / Time is the fire in which we burn.” What does this mean? Why is it significant to Shapiro?

10. Throughout the memoir, Shapiro uses literary extracts to illuminate what she feels or thinks—poems by Schwartz and Jane Kenyon, passages from Moby Dick and a novel by Thomas Mann. How does this help your understanding?

11. All her life, people had been telling Shapiro she didn’t look Jewish. If this hadn’t been part of her life already, how do you think she might have reacted to the news from her DNA test?

12. After Shapiro located her biological father, she emailed him almost immediately—against the advice of her friend, a genealogy expert. What do you imagine you would have done?

13. Why was it so important to Shapiro to believe that her parents hadn’t known the truth about her conception?

14. Her discovery leads Shapiro to reconsider her memories of her parents: “Her unsteady gaze, her wide, practiced smile. Her self-consciousness, the way every word seemed rehearsed. His stooped shoulders, the downward turn of his mouth. The way he was never quite present. Her rage. His sorrow. Her brittleness. His fragility. Their screaming fights.” (page 100)

15. On page 107, when discussing her father’s marriage to Dorothy, Rabbi Lookstein tells Shapiro, “We thought your father was a hero.” Shapiro comes back to her father’s decision to go through with the marriage several times in the book. Why?

16. At her aunt Shirley’s house, Shapiro sees a laminated newspaper clipping about the poem recited in a Chevy ad. (page 133) Why does Shapiro include this detail in the book? What is its significance?

17. On page 188, Shapiro writes, “In time, I will question how it could be possible that Ben—a man of medicine, who specialized in medical ethics—had never considered that he might have biological children.” How do you explain that?

18. How does Shapiro’s experience with contemporary reproductive medicine affect the way she judges her parents? What do you imagine future generations will say about our current approach to artificial insemination?

19. What do you make of the similarities between Shapiro and her half sister Emily?

20. On page 226, Shapiro brings up a psychoanalytic phrase, “unthought known.” How does this apply to her story?

21. What prompts Shapiro to legally change her first name?

22. Shapiro ends her book with a meditation on the Hebrew word hineni, “Here I am.” Why is this phrase so powerful?

23. On her hardcover tour for Inheritance, Dani Shapiro found that certain questions were asked by almost every audience. We’re sharing these questions along with Shapiro’s answers to deepen your understanding of the book and provide an interesting window into how Shapiro has continued to think about the book and her own story.


Audience Question: You’ve written multiple memoirs. When did you know that you’d have to write the story of Inheritance? How quickly after your discovery did you realize you’d eventually write a book about it?


AQ: Did Ben Walden and his family know you were writing about them? How did they feel about it?


AQ: One of the thorniest issues in your story, at least as it pertained to the Waldens, was the question of whether Ben might have other offspring conceived through sperm donation. What would happen if you were simply the first? In a particularly charged moment, Pilar asks you outright if you’ll protect them. Have there been other half-siblings who have appeared? And if so, what has happened?


AQ: Your book is dedicated to your father. Which father do you mean?


AQ: Is there any part of you that wishes you didn’t know? That you had never found out? What if your husband had never casually mentioned a DNA test to you?