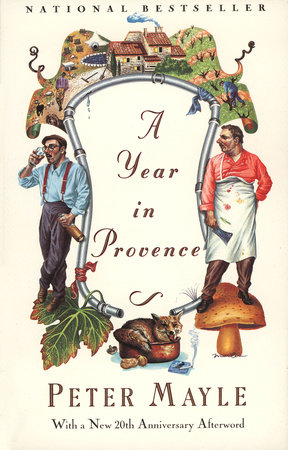 A Year in Provence

The questions, discussion topics, and reading list that follow are designed to enhance your group's reading of Peter Mayle's delightful books about life in Provence, where he and his wife bought a two-hundred-year-old stone farmhouse nestled in the foothills of the Lubéron Mountains.


1. How well did Mayle's frequent trips to Provence as a tourist prepare him for the reality of residing there? What were some of the initial surprises he and his wife encountered?

2. How does the form of the book--a month-by-month journal--enhance the immediacy of Mayle's observations and draw the reader into his experiences? How do the changing seasons mirror Mayle's own adjustment to his new environment?

3. Mayle writes that neighbors take on an importance in the country that they don't have in the city [p. 6]. How do his relationships with Faustin, Massot, Menicucci, and the other local workmen reflect this? Does the fact that Mayle is a foreigner influence the way he is treated? How do the men working on his house endear themselves to Mayle, despite his continuing frustrations with their casual attitude about completing the job?

4. Mayle notes there are "two areas of endeavor in which France leads the world-- bureaucracy and gastronomy" [p. 23]. What particular characteristics of the French does Mayle bring to light in stories about the bureaucracy involved in buying the house, a car, insurance, and other necessities?

5. The influx of tourists begins in May and reaches a high point in August. How does his status as a resident affect Mayle's attitudes about friends and acquaintances who, as he himself once did, try to take in everything Provence has to offer during a short holiday? Does he learn things about himself and the life he has chosen by looking through the eyes of visitors? To what extent are his own perceptions influenced by his English upbringing?

6. How does the Mayles' party for the workmen and their wives, as well as their own Christmas dinner at a local restaurant, put the events of the year into context and serve as a coda to the book as a whole?