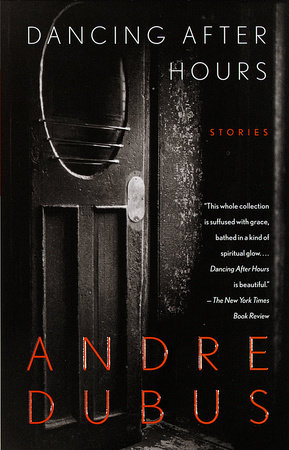 The discussion topics, questions, and biography that follow are intended to enhance your group's reading of Andre Dubus's remarkable collection of stories, Dancing After Hours. Dancing After Hours is an important new book by a writer who is considered, particularly by his fellow writers, a master of the art of short fiction in America.


1. For Discussion of Dancing After Hours:

In several of these stories the problems of dating, and the physical and emotional vulnerability inherent in the process, are explored. How does Dubus express through his characters--Ted Briggs, Tess, LuAnn, Lee Trambath, and others--the terror and emptiness dating can bring? How do both fear and courage enter into the search for love? Does maturity necessarily depend upon a progression from promiscuity to monogamy?

2. Andre Dubus has been praised for the realism with which he is able to represent the psychological and sexual lives of female characters. Do you see any difference in his rendering of male as opposed to female experience?

3. As this collection makes clear, for Dubus, mature adulthood seems to involve coming to terms with the pain of love, and also the pain of not having love. In what ways are these experiences similar?

4. Joyce Carol Oates has commented on Dubus's "deep commitment to his characters." Indeed, the third-person narrator in Dubus's stories never engages in ironic distance from either character or story. Dubus's empathy is pervasive; he does not pass judgment on his characters. How does the narrative point of view in these stories affect your experience as a reader?

5. A devout Catholic, Dubus has said, "I've seen the whole of my fictive world through the eyes of someone who believes the main problem in the United States is that we have lost all spiritual values and not replaced them with anything that is comparable." How is spirituality, however loosely defined, present in the lives of his characters?

6. Drinking and smoking play an important part in the lives of many of Dubus's characters--as habit, as deep pleasure, as the aid to self-revelation and intimacy. How does Dubus use them to reveal character and develop situations?

7. Since the accident in 1986 in which Andre Dubus lost one leg and most of the functions of the other, he has been confined to a wheelchair. How does this aspect of the author's life shape his vision in these stories? What elements of his fictional world do you see as the result of his working through of this extremely painful reality in his own life?

8. How would you characterize Dubus's distinctive prose style? You might want to consider his narrative strategy of circling back to certain key images and experiences.

For discussion of each story

1. Who gets killed in the story, and why? Is this killing portrayed purely as an accident?

2. Why do Kenneth's parents respond to the accident as they do? How is the blurring of the line between fantasy and reality reinforced at the end of the story?

3. "The Intruder" was Dubus's first published story; it appeared in Sewanee Review in 1963. What difference do you see between this story and the rest of the collection, which is comprised of much more recent work?

1. Why does Catherine sit down and calculate what percentage of her life was contained in the "two hours of truth" [p. 21] in which her husband told her he was leaving?

2. In what ways does this story illuminate the relationship between loss, grief, and time, and their effect on the re-alignment of one's sense of self?

3. What is the effect of the story's ending with the weddings of the woman's two daughters? Why does she herself not remarry?

1. In "Falling in Love" a conflict over abortion causes "the death of everything" [p. 38]--the end of a relationship in which two people love each other very much. Is this conflict more a matter of a lack of understanding between the sexes, or a matter of two different belief systems about abortion?

2. Does Andre Dubus portray the effect of deep emotion differently in male and female protagonists in this story? Consider how Ted Briggs deals with the loss of his love. How does the fact that he has been injured in Vietnam change his response to emotional life?

3. What does Ted mean when he tells Nick, with regard to dating and his desire to find a wife, "I need a philosophy to go out there with" [p. 42]? What is "the demon" he needs to confront by being alone for a while?

1. In this story Andre Dubus only gradually reveals to the reader what happened to Rusty and her family a year earlier. What are Rusty's first thoughts upon waking, and are they significant to her coming to terms with what happened? Why do you suppose Dubus uses this very slow technique of exposition, and do you find it effective?

2. How is the world of nature portrayed in this story? What is the relationship among the various kinds of predators mentioned? What is Rusty's attitude toward such acts of predation as hunting and fishing?

3. Why does Rusty take the sleeping pill, and then later regret having taken it? What is the affirmation she achieves by the end of the story?

1. Why does Tess tell Andrew the story of her friend Mona, who was killed by her husband? Why does she seem unable to stop herself from talking about what happened to Mona?

2. Does love, for Tess, inevitably contain the seeds of distrust, hatred, and bitterness? Is she being unfair to Andrew?

"All the Time in the World"

1. LuAnn Arceneaux, who reappears in three other stories in this collection, is created with great sympathy by Dubus. What are some of the ways in which Dubus gives this character depth and causes us to share his interest in LuAnn?

2. What is the relationship between LuAnn's passionate nature and her Catholicism?

3. When the heel breaks on LuAnn's shoe, her sitting position creates the perspective from which Ted Briggs gradually comes into her view and the reader's. What do you find effective or interesting about Dubus's style and his use of detail here? How does
he communicate the excitement of this meeting?

4. In the story's final paragraph, what imagery does Dubus use to describe the arrival of love? Do you find the end of the story moving? Is it rare for a person to discover love in this way?

"Woman on a Plane"

1. Why is the woman unable to write while her brother is dying? What is the source of her fear?

2. Why does the poem the woman tries to write about fear become a poem about love? How does impending death tie the two together?

1. In what ways does the Colonel's injury rearrange both his household and his marriage? How does physical pain change every aspect of Townsend's daily life?

2. Is it relevant to the story's situation that Lydia is both beautiful and rich? Is the portrayal of her character and her femininity realistic, or is it affected by her husband's--or the author's--idealization of her?

1. Why does Lee Trambath feel that he has gone wrong in his life? Why does he feel guilty about his former wives and his five children?

2. Why does Lee weep for himself after making love with a much younger woman? Why is the title so fitting? What is the effect of the story's ending?

1. What is the woman's motivation for plotting her husband's death?

2. Does the woman think of herself as extraordinary? Is Dubus's presentation of the mind of this woman
as effective as that of other female characters in the collection? Why or why not?

"The Timing of Sin"

1. The pace of this story is quite leisurely, as Dubus tells his entire story through a conversation between two women walking together. What kinds of revelations emerge? Does this slow pacing give a greater sense of realism to the depiction of a friendship between women?

2. Is Dubus right in having the friendship between LuAnn and Marsha, two married women, deepened by physical attraction? How does this statement enlarge the story's scope of love, eroticism, and affection?

3. Why is the story of Sylvie's experience at the center of this tale? Why does Sylvie's pain provoke LuAnn's desire for Roger?

1. How does this story differ from the others in the collection? Do you feel you get to know this woman, even though she remains unnamed? How does Dubus portray her life? Do you have a sense of what this marriage was like, even though the story is so brief?

"Out of the Snow"

2. Is there an ethical problem inherent, for LuAnn, in self-defense--in the fact that she has saved her own life at the possible expense of two other lives, even though they were the lives of criminals?

3. Why does Dubus here, as elsewhere, subject his characters to the terror of random events? What are the possibilities for wisdom and growth in the survival of such awful happenings?

1. Here, as in "The Colonel's Wife," Dubus gives us a close look at the difficulties of life in a wheelchair. Why is the story of Drew's skydiving adventure particularly relevant to what all the characters are seeking in "Dancing After Hours"?

2. Why does Dubus go into such detail about the routine of Emily's daily life? How does the gathering in the bar "after hours" transform the loneliness Emily feels? Do you think this transformation will have a lasting effect in her life?

3. What relevance do the descriptions and details of music have for the story?