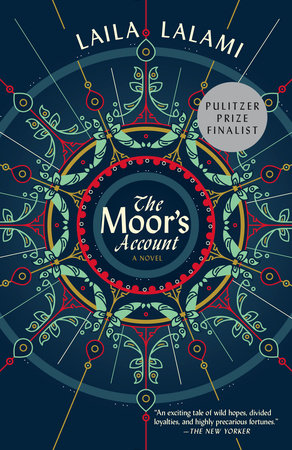 The questions, discussion topics, and suggested reading list that follow are intended to enhance your group’s experience of reading Laila Lalami’s The Moor’s Account. We hope they will provide you with many ways of approaching this groundbreaking historical novel from the author of Secret Son and Hope and Other Dangerous Pursuits.

2. Spanish conquest of the Americas relied upon several myths, including the myth that exploration was the preserve of white men and that native men and women were mostly silent witnesses. How does Estebanico challenge these myths?

3. The novel takes the form of a sixteenth-century Arabic travelogue. How does this structure help the story?

4. How would you describe Estebanico’s voice? What stylistic choices did the author make to give him a distinctive sound?

5. Estebanico writes, “The only thing at once more precious and more fragile than a true story is a free life.” What thwarts his attempts at regaining his freedom, again and again?

6. What role does Estebanico’s trafficking in slaves play in the story? How does it complicate his view of the Indians as well as our view of him?

7. Estebanico gives different names to many people (e.g. Kwachi, Balsehekona, Oyomasot) and many places (e.g. Portillo, Santa María, Land of the Indians) that remain unnamed in Cabeza de Vaca’s chronicle. What significance do names have for Estebanico?

8. Is Estebanico a fully reliable narrator? Which parts of his story seem truthful to you and which might be flights of fancy?

9. How does Estebanico’s relationship with Dorantes, Castillo, and Cabeza de Vaca transform over the course of the novel? How do the three Spaniards’ relationships with one another change as well?

10. The conquistadors consider themselves to be more culturally and technologically advanced than the Native American tribes they encounter in Florida and beyond. Discuss how the novel shows these advantages to be illusory and how Native Americans were more sophisticated and open-minded than the Spaniards ever expected them to be.

11. How does Estebanico portray indigenous characters in the novel? How does his view of them change from the first to the last chapter?

12. How would you describe the women in Estebanico’s memoir and in his life? Compare the characters of his mother, his sister, his wife, and other women from Native American tribes.

13. What role do stories—in all their forms, from rumor to legend to fairytale—play in the novel?