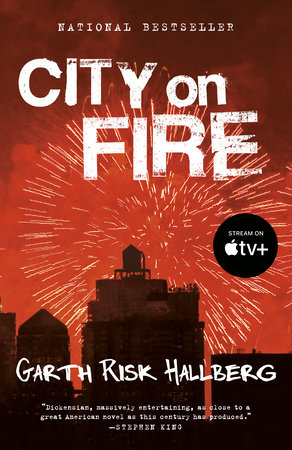 The introduction, discussion questions, and suggested reading that follow are designed to enhance your group’s discussion of City on Fire, an immersive novel set in 1970s New York, by Garth Risk Hallberg.


1. Analyze the structure of the novel. What might be the purpose of the inclusion of Interludes? How does the overall structure help to reveal or support the novel’s major themes? What does the structure indicate about time and memory, for example, or the interconnectedness of things?

2. Who would you say is the central character of the novel? Did you feel allied with any one individual as you were reading? Did this shift over the course of the book?

3. How well would you say the characters in the novel know one another? What prevents them from knowing one another better or more intimately? The narrative conjectures that “the nearer a thing is to us . . . . the easier it is to lose sight of” (page 816). How do you interpret this line? Do any of the characters reach a greater understanding of one another as the book approaches its conclusion? If so, what allows them to do this?

4. Much of the story revolves around the mystery of what happens to Sam on New Year’s Eve. Who shot Sam? Does the shooter ever confess or get caught? Is his or her motive revealed? Do you believe that the shooter is solely responsible for what has happened to Sam? Why or why not? How are the other characters in the novel affected by this crime?

5. In Chapter 4, William thinks, “You are what you perceive” (page 33). Explore the theme of identity in the novel. How do the characters define their own identities and those of others? How does race, class, gender, or sexuality inform these identities? How do experience and choice come into play? Jenny confesses that when she Americanized her name “the new name split her life in two” (page 537). What does she mean by this? Do any of the other characters share a sense of dual or conflicting identities? If so, how do they reconcile with this? What might this indicate about the nature of identity?

7. Explore the line “one possible definition of the word city might be a site of concentrated change” (page 300). In your view, is this supported or refuted as the novel reaches its conclusion? Explain.

8. What did you know about New York in the 1970s before reading this book? Has the novel’s vision of this time and place affected your own perspective on it? How does this world resonate with the times we live in now?

9. How does the story ultimately transcend its setting? In other words, while the story takes place in New York City, what universal themes or commentary about the human experience does the book offer and explore? Consider how the setting acts as a symbol, mirroring or exposing the inner lives and conflicts of its inhabitants.

10. Throughout the novel, Mercer imagines being interviewed about being a writer. What does Mercer understand his purpose to be as a writer? Examine the roles that art, music, and writing play in the lives of the characters.  How do these endeavors fulfill both those who create and those who observe or receive the art?

11. Who are the Post-Humanists and what are some of their beliefs? What do they hope to accomplish as a group? Would you say that they are successful? Why are the various members of the PHP drawn to Nicky?

13. The characters span several different stages of life. Do their experiences resonate with, or remind you of, any particular time in your own childhood, adolescence, or adulthood?

14. In the second Interlude, Richard writes that the enjoyment of fireworks was historically something that people shared despite class and ethnic divisions (page 6 of essay). What else can you think of that unites the city’s inhabitants despite their differences? Alternatively, what prejudices are exposed in the novel and what causes friction between various individuals and groups? Are these issues ever resolved? If not, does the novel suggest how they might be?

15. Jenny recalls that at nineteen years old she believed there were two kinds of people (page 454). What are these two groups and where would you place the book’s characters within them? How do Jenny’s views on these categories change as she gets older?

16. Consider the theme of faith—or the absence of faith—in the novel. Why is Charlie drawn to the Bible and why does he carry the book with him? What particular passages or messages does he find of interest? What does Keith share about his own faith with his son, Will? Besides religious faith, what other kinds of faith are depicted or explored in the novel? What challenges the faith of the characters and do they come to any resolution?

17. What are The Four Visions of Charlie? What do they reveal about Charlie and what he has learned? What is the vision of the future or futures that he has? And what does the last vision reveal about “where his error was” (page 862)?

18. Explore the motif of secrets in the novel. What are some of the secrets kept by the characters? Why do the characters choose to keep these things hidden? Are any of the secrets ultimately exposed or revealed? If so, who reveals them? For those who choose to reveal their own secrets, how are the characters changed via their confessions? Amory Gould believes that “secrets. . . bound people” (page 895). Do you agree? Explain. He also speaks of “the scandal of their sameness” (page 895). What does he mean by this?

19. Keith believes “there was a period just after the inevitability of ruin. . . that was the closest to pure freedom anybody got” (page 616). What does he mean by this? Do you agree? Explore the theme of freedom in the novel. What allows the characters to feel free or else prevents them from feeling free? How does freedom seem to be defined within the novel? How much control do the characters actually have over what happens to them?

20. Consider the treatment of morality in the novel. Does the novel provide a sense of whether or not there are “good” and “bad” people? What kinds of ethical choices are the characters faced with and what motivates the characters to make their decisions? What, according to Nicky, are the options for dealing with an “immoral system”? Do you agree with him? Why or why not?

21. There are various acts of rebellion and revolt—both personal and cultural—in the book. What are the characters rebelling against and why? How do they express their desire to rebel? What are the effects or consequences of their acts of rebellion? What is achieved or lost as a result? Explain.

22. Discuss the theme of loyalty in the novel. Where do the characters’ loyalties lie? What causes them to be loyal or else to betray one another? What then does the book indicate about what binds us to one another? Consider also the themes of forgiveness and redemption. Do any of the characters atone for their crimes and mistakes? How do they do this? Are they ultimately forgiven or redeemed?