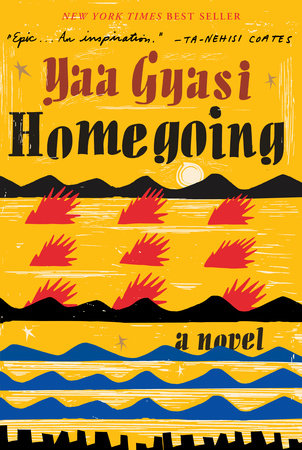 The introduction, author biography, discussion questions, and suggested reading that follow are designed to enhance your group’s discussion of Homegoing, the stunning debut novel by Yaa Gyasi.


1. Evaluate the title of the book. Why do you think that the author chose the word Homegoing? What is a homegoing and where does it appear in the novel? In addition to the term’s literal meaning, discuss what symbolic meanings or associations the title might have in terms of a connection with our place of birth, our ancestors, our heritage, and our personal and cultural histories.

4. Evaluate the treatment and role of women in the novel. What role does marriage play within the cultures represented in the novel and how are the women treated as a result? Likewise, what significance does fertility and motherhood have for the women and how does it influence their treatment? In the chapter entitled “Effia,” what does Adwoa tell Effia that her coupling with James is really about? In its depiction of the collective experiences of the female characters, what does the book seem to reveal about womanhood? How different would you say the treatment and role of women is today? Discuss.

5. Analyze the structure of the book. Why do you think the author assigned a chapter to each of the major characters? What points of view are represented therein? Does any single point of view seem to stand out among the rest or do you believe that the author presented a balanced point of view? Explain. Although each chapter is distinct, what do the stories have in common when considered collectively? How might your interpretation of the book differ if the author had chosen to tell the story from a single point of view?

6. Consider the setting of the book. What time periods are represented and what places are adopted as settings? Why do you think that the author chose these particular settings? What subjects and themes are illuminated via these particular choices? How does the extensive scope of the book help to unify these themes and create a cohesive treatment of the subjects therein?

7. In the chapter entitled “Quey,” Fiifi tells Quey that “[the] village must conduct its business like [the] female bird” (53). What does he mean by this and why do you think that Fiifi chooses this approach?

8. Why was Quey sent to England? After his return home, why does Quey say that it was safer in England? Why might he feel that what he faces at home is more difficult than the challenges he faced in leaving home and living abroad?

9. James’s mother, Nana Yaa, says that the Gold Coast is like a pot of groundnut soup (89). What does she mean by this?

10. Why does Akosua Mensah insist to James, “I will be my own nation” (99)? What role do patriotism, heritage, and tradition play in contributing to the injustices, prejudices, and violence depicted in the book? Which other characters seem to share Akosua’s point of view?

11. Explore the theme of complicity. What are some examples of complicity found in the novel? Who is complicit in the slave trade? Where do most of the slaves come from and who trades them? Who does Abena’s father say is ultimately responsible (142)? Do you agree with him? Explain why or why not.

13. What significance does naming have in the book? Why do some of the characters have to change or give up their names? Likewise, what do the characters’ nicknames reveal both about them and about those who give or repeat these names? What does this dialogue ultimately suggest about the power of language and naming?

14. Explore the motif of storytelling. Who are the storytellers in the book and what kinds of stories do they tell? Who is their audience? What might these examples suggest about the purpose and significance of a storytelling tradition?

15. According to Akua, where does evil begin? Where else in the book do readers find examples that support her view? What impact does Akua’s opinion have on Yaw’s lifework? Does he agree with Akua’s view or refute it? Do you agree with her? Discuss.

16. What is history according to Yaw? What does he tell his students is “the problem of history” (226)? Who does Yaw say we believe when reading historical texts and what does he say is the question we must ask when studying history? How might these ideas influence your own reading of Gyasi’s book and reshape your ideas about the historical subjects and themes treated therein?

17. Sonny says that the problem in America “wasn’t segregation but the fact that you could not, in fact, segregate” (244)? What does he mean by this? What does Sonny say that he is forced to feel because of segregation? Which of the other characters experience these same feelings and hardships? Does there seem to be any progress as the story goes on? If so, how is progress achieved? Alternatively, what stymies and slows progress in this area?

18. What is Marcus studying and why isn’t his research going well? What feeling does he indicate that he hopes to capture with his project? Why does Marcus go to Ghana and what does he learn from his experiences there? Marcus believes that “most people lived their lives on upper levels, not stopping to peer underneath (298). What does he mean by this? Where do we find examples of this elsewhere in the book? Are there any characters in the novel who defy this characterization?

19. Consider the book’s treatment of colonialism and imperialism. In the chapter entitled “Esi” at the start of the book, what does Esi’s mother tell her daughter that weakness and strength really are? How does her definition of weakness and strength correspond to the dialogue about colonialism and imperialism that runs throughout the book? Discuss how this dialogue expands into a deeper conversation about freedom and human rights. Have the issues surrounding colonialism, imperialism, freedom, and human rights featured in the book been resolved today or do they linger? If they remain, does the book ultimately offer any suggestions or advice as to how this might be remedied?