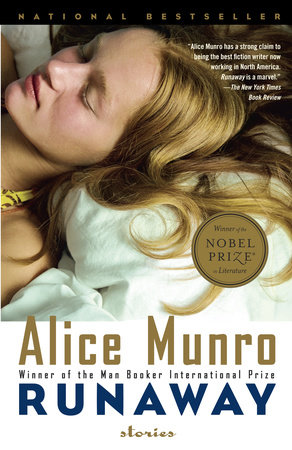 <p align="left">“Alice Munro has a strong claim to being the best fiction writer now working in North America. Runaway is a marvel.” –The New York Times Book Review <p align="left">  <p align="left">The introduction, discussion questions, suggestions for further reading, and author biography that follow are intended to enhance your group’s conversation about Alice Munro’s superb new collection, Runaway. In these eight tales, we find women of all ages and circumstances, their lives made palpable by the subtlety and empathy of this incomparable writer.


1. “Runaway”Why is Sylvia so fond of Carla? Is Sylvia right, given the circumstances, to suggest that Carla leave her husband and give her the means to do so?

2. When Carla tells her parents she wants a “more authentic” life, what does she mean by this [p. 33]? How much does Carla know about authenticity or about life?

3. What is Clark’s appeal for Carla? What darker suggestions does the story make about Clark’s character? It seems that Clark has wanted to get rid of Carla’s beloved pet goat: why? What resonance does Carla’s vision of the goat’s bones lying in a nearby field have for the reader’s understanding of her future?

4. “Chance” Why does Juliet decide to pursue Eric, a man she has met briefly only once? Is this a haphazard adventure, or does she go to Whale Bay with a determination about what she wants? She has told Eric about her studies in Greek and Latin, “I love all that stuff. I really do” [p. 71]. Later, she thinks of her love of the classical languages as her “treasure” [p. 83]. Why does she choose a man whose reading includes only National Geographic and Popular Mechanics [p. 82]?

5. Consider the end of the story: “She can tell by his voice that he is claiming her. She stands up, quite numb, and sees that he is older, heavier, more impetuous than she has remembered. He advances on her and she feels herself ransacked from top to bottom, flooded with relief, assaulted by happiness. How astonishing this is. How close to dismay” [p. 85]. What does this passage express about Juliet’s situation and her feelings?

6. “Soon”When Juliet finds the print of Chagall’s I and the Village and buys it for her parents, she tells Christa, “It makes me think of their life. . . . I don’t know why, but it does” [p. 88]. What is the significance of this painting as a gift and that Juliet later finds it hidden away in their attic? What does Juliet come to understand about her parents’ marriage?

7. Sara tells Juliet, “When it gets really bad for me–when it gets so bad I–you know what I think then? I think, all right, I think–Soon. Soon I’ll see Juliet” [p. 124]. Why does Juliet refuse to acknowledge this statement from her dying mother? What makes the final paragraph of the story so effective in conveying the moment’s cold emotion?

8. “Silence”Like Carla in “Runaway,” Juliet seems to take pride in her choice of an unconventional life. Does Penelope punish her mother for denying her the comfortable, conventional life she experiences with her friend Heather’s family [p. 144]? Is Juliet right or wrong to share with Penelope, just after Eric’s death, tales of their arguments and his infidelity and to describe the burning of his body on the beach [p. 149]? Is it possible that Juliet says something during this time that is, for Penelope, unforgivable? To what extent does the story repeat the pattern of “Soon” and Juliet’s rejection of her own mother?

9. What does Juliet not see about herself that is clear to the reader? What aspects of her character are problematic? Is she admirable? Is she a narcissist? Is she “lacking in motherly inhibitions and propriety and self-control” [p. 156]? How does she handle the suffering inflicted upon her by Penelope and the diminishment of her life as she ages?

10. “Passion” When Mrs. Travers is talking about Tolstoy’s Anna Karenina with Grace, she says her sympathies shifted from Kitty, to Anna, to Dolly, “I suppose that’s just how your sympathies change as you get older. Passion gets pushed behind the washtubs” [p. 172]. Does passion have several meanings in this story? What does passion mean for each character?

11. “The ease with which [Grace] offered herself” to Maury is “a deliberate offering which he could not understand and which did not fit in at all with his notions of her” [p. 173]. Later, Grace realizes it would have been “a treachery to herself” to think of marrying Maury [p. 190]. What changes for Grace when she spends time with Neil? What causes this profound shift in perspective? What do she and Neil have in common?

12. The story opens with Grace’s return forty years later to find the Traverses’ house on the lake, which is the site of “old confusions or obligations” [p. 161]. Why does Munro choose not to tell us what Grace’s life is like now and how the choices she made that day have affected her?

13. “Trespasses”Harry tells Lauren about Eileen’s first child and the circumstances of that child’s death when she unknowingly picks up the box containing the first child’s ashes [pp. 203—04]. What do we learn about his character from the way he narrates the story and his attitude toward Lauren as he tells her? What does he imply about Eileen? How does Lauren’s response reflect her feelings toward her parents and to the life they’ve chosen?

14. Lauren, as Delphine points out, is “a kid that is not short of information” [p. 220]. We don’t learn until page 226, however, that Lauren is only ten. Why does Munro withhold this information until fairly late in the story?

15. Why do Harry and Eileen decide to make a ceremony of scattering the first child’s ashes? What is the impact of Harry’s words, “This is Lauren . . . and we say good-bye to her and commit her to the snow” [pp. 233—34]? What is the effect of the story’s final paragraph about Lauren’s reaction to the burrs clinging to her pajamas?

16. “Tricks”This story is based on the Shakespearean plots that involve twins, mistaken identities, and precise symmetry. Such tricks of plot, Robin thinks, are supposed to be a means to an end, “The pranks are forgiven, true love or something like it is rekindled, and those who were fooled have the good grace not to complain” [p. 268]. Why is the key to the mystery revealed to Robin so late in the game? Why did the lovers base their happiness on such a risky proposal? After finding out what had come between herself and Danilo, Robin reflects, “That was another world they had been in, surely” [p. 269]. What was this other world?

17. The title of this story might also be “Chance.” What does Munro suggest about the power of chance in shaping a life?

18. “Powers”The story opens with Nancy’s diary and her first person voice. What do we learn about Nancy’s character in this intimate narrative form? According to Ollie, Nancy is “not outstanding in any way, except perhaps in being spoiled, saucy, and egotistical”; as a girl she was “truly, naturally reckless and full of some pure conviction that she led a charmed life” [pp. 285, 287]. Is this an accurate description of Nancy?

19. Like several other stories in this collection, “Powers” takes place in at least two time periods. It begins in 1927 and ends some time in the early seventies. What is the effect of this dual immersion in the early and late stages of the characters’ lives? How accurately does this story project the sense of reality in its main character’s voice and her immersion in a particular time and place?

20. What does Nancy want or expect from marriage? Why does she marry Wilf? Does it seem that she would prefer to marry Ollie? Why or why not? Does Nancy warn Tessa against Ollie out of jealousy, or out of a realistic concern that he is not to be trusted?

21. Does the story’s ending describe a dream [pp. 330—35]? A vision? Why does it provide Nancy with a “sense of being reprieved” [p. 335]? What does it tell us about Nancy’s conscience and about her lifelong involvement with Tessa and Ollie?

22. For discussion of RunawayMost of these stories involve young women who act upon a strong desire for sexual or romantic fulfillment or for escape from a stifling life. Is desire liberating or confining? Do these characters really know what they want or need? Does Munro suggest that desire is provisional and subject to change? Do the stories imply that life is inherently unstable and unknowable?

23. Writer Alan Hollinghurst has observed, “Munro’s stories have always felt exceptionally capacious; they have the scope of novels, though without any awkward sense of speeding up or boiling down. . . . It’s almost impossible to describe their unforced exactness, their unrushed economy” [The Guardian, February 5, 2005]. Which techniques does Munro employ to accomplish this illusion of space and time in only forty or fifty pages?

24. In “Soon,” Juliet comes across a chatty letter she had written to Eric the summer she visited her parents [p. 124]. In it she finds “the preserved and disconcerting voice of some past fabricated self” [p. 125]. How does this idea of false self-representation work in various stories? Do characters tend to misrepresent themselves mainly in letters, or in person as well? Do they believe in these “fabricated selves” that they create for themselves and others?

25. Most of the stories in Runaway involve an older woman who is looking back at a determining moment in her youth. How do these characters view their younger selves? What are the qualities that accompany their reminiscences about the past–sentimentality, irony, bitterness, regret, a desire to change the story?