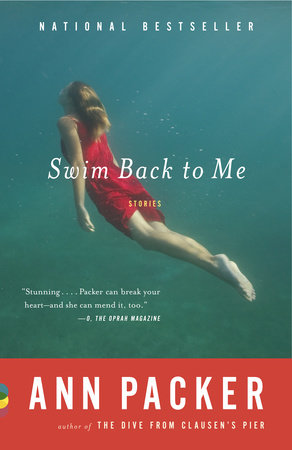 Swim Back to Me

The questions, discussion topics, and suggestions for further reading that follow are intended to enrich your discussion of Ann Packer’s Swim Back to Me.  In her masterfully crafted and absorbing new book, Ann Packer portrays a group of characters struggling to come to terms with the conflicts and crises of late youth and adulthood, the ties that bind families together, and what happens when those bonds are tested.


1. The stories “Walk for Mankind” and “Things Said or Done” are interlocking narratives that capture the lives of two families over the course of several decades. “Walk for Mankind” paints a vivid portrait of Sasha and Richard as young teenagers, and also provides a concise but clear portrait of Richard at the age of fifty. In the second story, “Things Said or Done,” we see what has become of Sasha as a grown woman. How do these revelations about who Sasha and Richard become as adults defy or fulfill our expectations based on who they were as adolescents? Were you surprised by the trajectories of their lives? Why or why not?

2. When Sasha asks her father for a ride to the fund-raiser called Walk for Mankind, her father replies, “Ah, the Walk. Noblest of causes.” Later, Richard’s mother takes him to the Oakland ghetto, where they pass a prostitute, causing his mother to remark, “She’s mankind, too.” Discuss Richard’s mother’s views about class and social justice.

3. On page 16, Richard reflects on his mother’s reasons for leaving their family and remembered that she used her desire to help the underprivileged as a rationalization. He thinks wryly that “there were underprivileged and undereducated women on our side of the bay, too.” How did you feel reading the scenes with Richard’s mother? Is she a sympathetic character? Why or why not?

4. What is Harry Henry’s house? What does it represent to Richard and Sasha?

5. During the Walk for Mankind, a stranger called Karl shows Richard a series of pictures documenting the evolution of a frog. Years later, Richard asks, “How do people do it, pry themselves from their pasts. . . I wish I could say my life in the natural world began with a transformative experience. . . The course of true progress is boring…it’s incremental. Think of that frog, the one in Karl’s picture. There wasn’t a single moment when he passed into maturity….” How do the ideas about growth and change that Richard is grappling with here relate to Packer’s themes in this story and throughout Swim Back to Me?

6. Ralph Waldo Emerson’s ideas about knowledge and personal growth seem to hover over both “Walk for Mankind” and “Things Said or Done.” At one point Richard’s father discusses the idea of the quest in relation to one of Emerson’s poems. Discuss the following passage about transformation from Emerson’s essay “Experience” in relation to Packer’s two linked stories: “If any of us knew what we were doing, or where we are going, then when we think we best know! We do not know today whether we are busy or idle. In times when we thought ourselves indolent, we have afterwards discovered that much was accomplished, and much was begun in us.  All our days are so unprofitable while they pass, that 'tis wonderful where or when we ever got anything of this which we call wisdom, poetry, virtue. We never got it on any dated calendar day.”

7. “Walk for Mankind” ends with these words: “It would be years before it occurred to me that with that one gesture I managed to kill two birds with one stone. And I do mean kill. And I do mean birds, though perhaps I should say it with an English accent, buds. It isn’t easy, admitting your murders.” What do the birds in this paragraph symbolize? Compare and contrast with the exchange on page 30, in which Sasha and Richard make an emergency stop at a stranger’s house during the walk, and the tall man asks Sasha, “Did you get both birds?” How does the meaning and symbolism shift as the story continues? What does Richard feel he has murdered at the end of the story?

8. In “Things Said or Done,” Sasha says, “Such is the lot of the narcissist’s child, to inherit her parent’s umbrage over the world’s indifference.” What is Sasha’s lot?

9. At the wedding, Sasha and her father discuss a Yeats poem, which posits a dichotomy between conscience and vanity. Sasha says that she struggles with her conscience, and her father with his vanity. Which is worse, guilt or humiliation? Which is the animating fear for the characters in both “Walk for Mankind” and “Things Said or Done”?

10. At the conclusion of “Things Said or Done,” it becomes clear that Sasha has no memory of Richard, although Richard was a critical character at a formative moment of her youth. What does this suggest about our childhood experiences? What do you think the author is trying to convey about memory and experience, the nature of the past, and its relation to our future?

11. Discuss this paradoxical predicament from the end of “Jump”: “Wanting to be gone was one thing, but going was another.”

12. On page 158 the heroine of “Dwell Time” catalogs all the physical, empirical things she knows about Matt--“he counted out vitamins”; “he liked her to put her hand on his bare chest”--and then asks: “Was that someone who would run away?” How much do we know about the people we love? How much is it possible to know?

14. In the analogy presented on page 172--“How long would the next one be, the next period at home before he went off to war again”--where is war, and where is Matt’s true home?

15. At the end of “Her Firstborn,” Packer writes: “Dean’s had it all wrong: it isn’t that Lise had a baby who died, but rather that she had a baby, who died.” How is the meaning of this sentence profoundly changed by Packer’s movement of the comma? What are we meant to infer from this shift in emphasis? How does this alter our understanding of Lise’s experience?

16. In “Jump,” both Carolee and Alejandro are invested in projecting images of themselves that aren’t quite true to their life histories. Both are also uncomfortable with issues of affluence and privilege. Why? What are they trying to conceal, and who are they pretending to be?

18. Do the fathers in Packer’s collection have anything in common? The families? What do you think Packer views as the perils and consolations of family life?