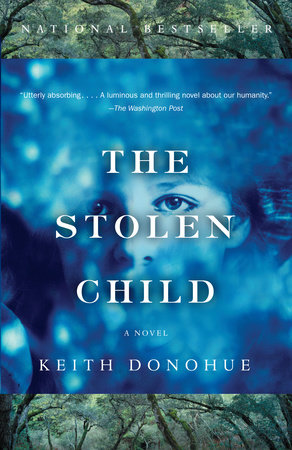 “Utterly absorbing. . . . A luminous and thrilling novel about our humanity.”
—The Washington Post

“I am a changeling—a word that describes within its own name what we are bound and intended to do. We kidnap a human child and replace him or her with one of our own” [p. 3].

The introduction, discussion questions, author biography, and suggestions for further reading that follow are designed to enhance your group’s discussion of Keith Donohue’s imaginative and unique tale, The Stolen Child.


1. Henry Day begins his narration with “Don’t call me a fairy” and then he takes the reader on a quasi-scientific account of the differences between fairies, hobgoblins, and other “sublunary spirits” [pp. 3–4]. Yet Aniday and the rest of the changelings refer to themselves as “faeries” throughout the book. Why does Henry insist on not being called a fairy? In what other ways does Henry attempt to distance himself from his prior existence?

2. Twins and other twosomes figure predominantly in the book: Henry and Aniday, Tess and Speck, Big Oscar and Little Oscar, Edward and Gustav, Mary and Elizabeth. Other characters form pairs: Luchóg and Smaolach, Kivi and Blomma, Onions and Béka, George Knoll and Jimmy Cummings. What is the significance of the doubles? In what ways can Henry and Aniday be read as two halves of one being? How does the author, beyond using two alternating narrators, play with the theme of doubles?

3. Rather than each chapter echoing its counterpart, the two stories run at different speeds until the end of the book. How does the author manage time in the novel? Where in the narrative does he relate the same incident from different perspectives and in different sequences?

4. When Henry and his friends attempt to synchronize their watches before looking for little Oscar Love, not one of them has the same time as the others. At other points in the story, Henry or Aniday forget the time of day or, in some cases, what year it is. What does that say about their place in time?

5. In chapter 35, Ruth Day says “I’ve known all along, Henry” [p. 301]. Similarly, Henry dreams of Tess changing her form and saying that she, too, knows the truth. What does Henry think they know about him?

6. A critical event in the novel is Bill Day’s suicide and Henry’s muted reaction. What did Bill come to understand about his son? Why do you think Henry’s mother, Ruth Day, didn’t react in a similar manner?

8. The changeling legends were cautionary tales meant to illustrate the dangers of creatures that many people once believed in. As McInnes points out in the novel, they were also horrifying explanations for “failure to thrive,” physical deformities, or mental illness in children. Are Henry and Aniday’s stories cautionary tales? What do you make of the changeling who took the place of young Gustav Ungerland and never said another word?

9. What is the significance of music in Henry Day’s transformation? Does the final concert offer Henry a chance at redemption?

10. What role do books play in Aniday’s transformation? As Speck teaches Aniday to read and write, does his understanding of the world change? Is his memoir a chance at redemption?

11. Aniday’s predecessor is referred to as Chopin, but we never really know much about Gustav Ungerland as a changeling. Similarly, once Igel and the others depart the world, they are rarely discussed. Why do the faeries avoid mentioning those who have departed?

12. Why does Speck leave? What is the significance of her map on the ceiling? Do you think Aniday finds Speck?

13. The epigraph from “Nostos” by Louise Gluck states: “We look at the world once, in childhood. / The rest is memory.” Why do you think the author chose it? How does it relate to the novel?

14. Is this book a fairy tale for adults? If so, what is the moral of the story? Who, in the end, is the stolen child?