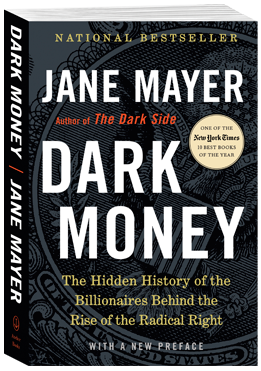 “Absolutely necessary reading for anyone who wants to make sense of our politics.”
—The New York Review of Books

Why is America living in an age of profound and widening economic inequality? Why have even modest attempts to address climate change been defeated again and again? Why do hedge-fund billionaires pay a far lower tax rate than middle-class workers? In a riveting and indelible feat of reporting, Jane Mayer illuminates the history of an elite cadre of plutocrats—headed by the Kochs, the Scaifes, the Olins, and the Bradleys—who have bankrolled a systematic plan to fundamentally alter the American political system. Mayer traces a byzantine trail of billions of dollars spent by the network, revealing a staggering conglomeration of think tanks, academic institutions, media groups, courthouses, and government allies that have fallen under their sphere of influence. Drawing from hundreds of exclusive interviews, as well as extensive scrutiny of public records, private papers, and court proceedings, Mayer provides vivid portraits of the secretive figures behind the new American oligarchy and a searing look at the carefully concealed agendas steering the nation. Dark Money is an essential book for anyone who cares about the future of American democracy. 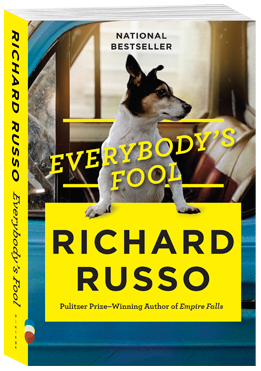 In these pages, Richard Russo returns to North Bath, the Rust Belt town first brought to unforgettable life in Nobody’s Fool. Now, ten years later, Doug Raymer has become the chief of police and is tormented by the improbable death of his wife—not to mention his suspicion that he was a failure of a husband. Meanwhile, the irrepressible Sully has come into a small fortune, but is suddenly faced with a VA cardiologist’s estimate that he only has a year or two left to live.

As Sully frantically works to keep the bad news from the important people in his life, we are reunited with his son and grandson . . . with Ruth, the married woman with whom he carried on for years . . . and with the hapless Rub Squeers, who worries that he and Sully aren’t still best friends. Filled with humor, heart, and hard-luck characters you can’t help but love, Everybody’s Fool is a crowning achievement from one of the great storytellers of our time.

“Everybody’s Fool is like hopping on the last empty barstool surrounded by old friends.”
—Entertainment Weekly 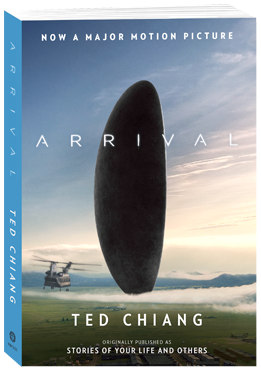 Read the story that inspired
Arrival, “the best film of the year.”
(The Atlantic)

Previously published as Stories of Your Life and Others. Includes “Story Of Your Life,” the basis for the major motion picture Arrival, starring Amy Adams, Forest Whitaker, Jeremy Renner, and directed by Denis Villeneuve.

Ted Chiang has long been known as one of the most powerful science fiction writers working today. Offering readers the dual delights of the very strange and the heartbreakingly familiar, Arrival presents characters who must confront sudden change. In “Story of Your Life,” which provides the basis for the film Arrival, alien lifeforms suddenly appear on Earth. When a linguist is brought in to help communicate with them and discern their intentions, her new knowledge of their language and its nonlinear structure allows her to see future events and all the joy and pain they may bring. In each story of this incredible collection, with sharp intelligence and humor, Ted Chiang examines what it means to be alive in a world marked by uncertainty, but also by wonder.