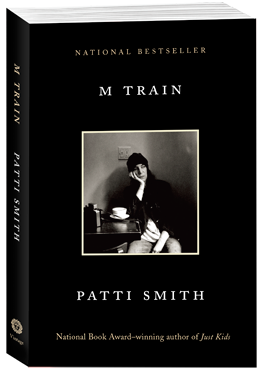 “This book is brilliant. A poetic, energetic search for the secret links between life and art—and coffee.”
—Henning Mankell

From the National Book Award–winning author of Just Kids: an unforgettable odyssey of a legendary artist, told through the cafés and haunts she has worked in around the world. It is a book Patti Smith has described as “a roadmap to my life.”

M Train begins in the tiny Greenwich Village café where Smith goes every morning for black coffee, ruminates on the world as it is and the world as it was, and writes in her notebook. Through prose that shifts fluidly between dreams and reality, past and present, we travel to Frida Kahlo’s Casa Azul in Mexico; to the fertile moon terrain of Iceland; to a ramshackle seaside bungalow in New York’s Far Rockaway that Smith acquires just before Hurricane Sandy hits; to the West 4th Street subway station, filled with the sounds of the Velvet Underground after the death of Lou Reed; and to the graves of Genet, Plath, Rimbaud, and Mishima.

Woven throughout are reflections on the writer’s craft and on artistic creation. Here, too, are singular memories of Smith’s life in Michigan and the irremediable loss of her husband, Fred Sonic Smith.

Braiding despair with hope and consolation, illustrated with her signature Polaroids, M Train is a meditation on travel, detective shows, literature, and coffee. It is a powerful, deeply moving book by one of the most remarkable multiplatform artists at work today.

“Lyrical…. A kaleidoscopic ballad about the losses dealt out by time and chance and circumstance.”
—Michiko Kakutani, The New York Times 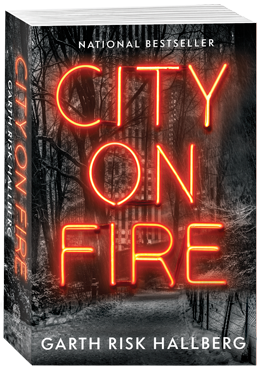 “As close to a great American novel
as this century has produced.”
―Stephen King

New York City, 1976. Meet Regan and William Hamilton-Sweeney, estranged heirs to one of the city’s great fortunes; Keith and Mercer, the men who, for better or worse, love them; Charlie and Samantha, two suburban teenagers seduced by downtown’s punk scene; an obsessive magazine reporter and his idealistic neighbor—and the detective trying to figure out what any of them have to do with a shooting in Central Park on New Year’s Eve.

The mystery, as it reverberates through families, friendships, and the corridors of power, will open up even the loneliest-seeming corners of the crowded city. And when the blackout of July 13, 1977, plunges this world into darkness, each of these lives will be changed forever. City on Fire is an unforgettable novel about love and betrayal and forgiveness, about art and truth and rock ’n’ roll: about what people need from each other in order to live—and about what makes the living worth doing in the first place.