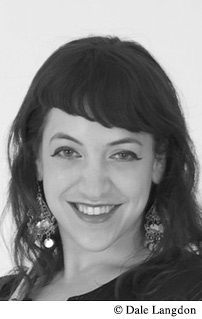 Leela Corman is the author of Unterzakhn and the artist for the 2019 Fight Evil, Read Books tee shirt design.

Q: How do you think books and art can change the world?

A: I don’t look at art and books as things that necessarily change the world. We do not know what exactly changes the world; we are too small to perceive the patterns we live within. In order to answer your question at all I need to separate the categories of art and books, because they have very different effects and are valued quite differently by many. There are many people who do not value any visual medium and are therefore asleep to the medicine that art can be. Let’s forget about those people for a minute and talk about the rest of us. Art is a raft in a sea of lies. Art is a portal that brings inarguable truth to the physical plane. Art is a space that welcomes your addictions, your failures, your mental health struggles, your aversions and attachments, your desires, your secrets, your fears, and everything you love in this world. Art changes your perceptions. It alters your chemistry. It exerts powers outside of verbal and linear methods of communication. It also pisses people off, which is why we had the Degenerate Art Exhibition in Germany in 1937, the NEA Four in 1990, and so on. Telling the truth about war, sex, politics, how people survive, and what people desire somehow makes many people angry. Those people attempt to impose on us all only art that illustrates the lies they are telling; see: Fascist art and architecture. Stay with me. Because you know what art I think can change the world? Art that brings ever greater representation of humans to more eyes. Right now I’m thinking of the television show Pose, which tells the story of queer and trans people in the 1980s and 1990s creating their own families and spaces where they could be safe and beautiful and loved, in a world that wanted to crush them then and often still does now. I’m thinking of drag artists and all who look at the world and say, “This is not magical enough, this is not embodied enough,” and bring their own power to it. That changes the world. When we can all see one another, that changes the world.

Let’s tackle books now. Books can change the goddamn world. I don’t even know if I have what it takes to explain that. Just, if you don’t read, you won’t understand anything, and if you have no understanding of history or human nature, you might end up becoming a tool of people who want to cause harm. Also, stories are the hand in the dark. Are you suffering? Do you need connection? Someone has a story for you, someone can carry your story.

Q: How have books and art changed your life?

A: Art is many things, and in my own personal history it has played many roles, some of them in opposition to one another. It has been, variously, the way I make a living, the subject I studied in school, my tormentor, the only real skill set I possess, my obsession, a set of technical problems for me to solve, a force I knew I needed but ran from, a broken relationship that took twenty years to heal, and finally, now, the portal through which I access all that is not physical, including the world of the dead where my ancestors, some friends, and my first child live. I would not say that art has changed my life, because I’ve never known a life without it.

As for books, let me tell you a story. It also involves art, come to think of it. When I was sixteen, I went through a phase where I started questioning the basic structure of reality to such an extent that I thought I might be going crazy. I want to stop here and acknowledge that I was probably nowhere near any kind of mental health crisis. But I was not ok, and I wasn’t telling anyone that because I had no idea how to, and generally still don’t. During that time I started taking figure-drawing classes at the Art Students League of New York, a delightful turpentine-scented pile on West 57th Street that I’m thrilled is still there. The instructor was a rosy-cheeked man with white hair and a white beard who gave lectures during school breaks where he would choose a piece of skeletal anatomy and draw it (perfectly) on a board using a tiny piece of charcoal on a yard-long stick. He taught me never to begin with the head, among other things. Mostly, he taught me to focus on structure, the provable structure of the human body. I had lost trust in structure. At the same time, I started reading Robert Pirsig’s Zen and the Art of Motorcycle Maintenance, which is exactly the kind of book you find on your dad’s bookshelf if you are a teenager in the late 1980s and your dad is a boomer sort-of-post-hippie who’s into martial arts and motorcycles. That book shocked me. It shocked my neural pathways back to health. The combination of reading that book and devotedly learning the structure of the human body with my eyes and hands made me sane again. I never questioned the structure of reality again.

Beyond that, my relationship with both art and books is so vast that I don’t even know where to start. At random, I’ll tell you that I’m pretty sure Primo Levi is some kind of father to me, that Rabih Alameddine’s book The Angel of History burned me, that I can’t stop using The Odyssey in my own comics, that, similarly, I keep putting the upside down bullet-ridden legs from Otto Dix’s painting Triptychon Der Krieg into my comics, and that when I stand in front of a Rothko I am completely overwhelmed by emotion.

Q: What does “Fight Evil, Read Books” mean to you?

A: It’s an urgent message for our time and all times. But right now, right now, read and learn and fight and connect.