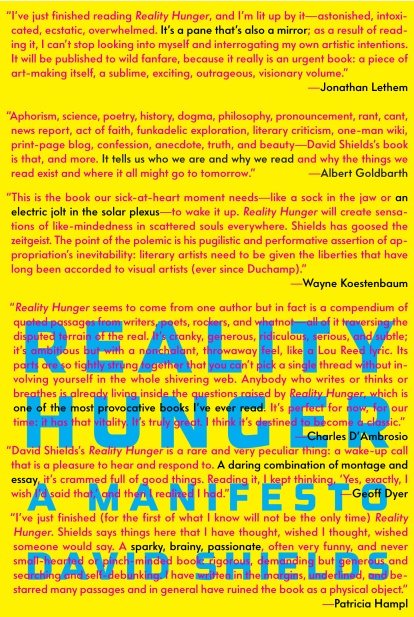 An open call for new literary and other art forms to match the complexities of the twenty-first century.

Reality TV dominates broadband. YouTube and Facebook dominate the web. In Reality Hunger: A Manifesto, his landmark new book, David Shields (author of the New York Times best seller The Thing About Life Is That One Day You’ll Be Dead) argues that our culture is obsessed with “reality” precisely because we experience hardly any.

Chuck Klosterman on Twitter: “Reality Hunger, by David Shields, might be the most intense, thought-accelerating book of the last 10 years.”

Biography:
David Shields is the author of nine previous books, including The Thing About Life Is That One Day You’ll Be Dead, a New York Times best seller; Black Planet: Facing Race During an NBA Season, a finalist for the National Book Critics Circle Award; Remote: Reflections on Life in the Shadow of Celebrity, winner of the PEN/Revson Award; and Dead Languages: A Novel, winner of a PEN/Syndicated Fiction award. His essays and stories have appeared in the New York Times Magazine, Harper’s, Yale Review, Village Voice, Salon, Slate, McSweeney’s, and Utne Reader. A recipient of a Guggenheim fellowship, two NEA fellowships, and a New York Foundation for the Arts Fellowship, he is a senior editor of Conjunctions magazine. His work has been translated into a dozen languages.