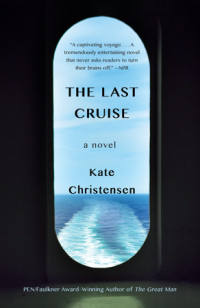 Now available in paperback, Kate Christensen’s most recent novel, The Last Cruise, navigates the choppy waters of love and danger. The 1950s ocean liner Queen Isabella is making her final voyage—a retro cruise from Long Beach to Hawaii and back—before heading to the scrapyard. For the guests on board, it’s a chance to experience a bygone era of decadent luxury, complete with fine dining, classic highballs, string quartets, and sophisticated jazz. Smoking is allowed but not cell phones—or children, for that matter. But this is the second decade of an uncertain new millennium, not the sunny, heedless mid-twentieth century, and certain disquieting signs of strife and malfunction above and below deck intrude on the festivities, throwing a trio of strangers together in an unexpected and startling test of character.

The Reading Group Center chatted with Kate about her inspiration behind the book’s 1950s theme, how her novel points to greater issues in our world today, and what she thinks book clubs should be talking about.

Enjoy this Q&A with Kate Christensen!

Reading Group Center: What was your inspiration for writing The Last Cruise?

Kate Christensen: For some reason, probably because I always clicked on them so they got embedded in my news-feed algorithm, news stories about cruises going awry started regularly popping up a number of years ago—a nasty shipwide norovirus outbreak on the high seas, or an engine room fire knocking out power and stranding a ship for five days off the coast of Mexico with no refrigeration or air conditioning or plumbing or a honeymooner falling overboard and drowning, etc. It all sounded like a total nightmare. I already had a weird phobia of cruises—I’ve never been on one—so these stories both vindicated and amped up my fear.

I live in Portland, Maine, which is a stop on the cruise ship route up the Eastern seaboard. Through the season, enormous cruise ships frequently anchor in port, so grotesquely vast they almost dwarf the city itself, disgorging hundreds of passengers into the narrow cobblestoned streets of the Old Port, throngs of consumers buying souvenirs and food and T-shirts, injecting the local economy with an infusion of money. Then they all get back onto the mother ship and lumber off to the next port of call, trailed by a squad of squawking seagulls. Every time a supership comes to town, it’s a little surreal, like the invasion of a strange, soft, rapacious capitalist army in cargo shorts and white jeans. Just as with the news stories, I found myself becoming perversely fascinated with the entire pageant as it repeated itself throughout the cruising season: hulking white behemoth filling the harbor, gulping fuel and discharging exhaust, a mobile megahotel bigger and taller than our biggest and tallest building, its population suddenly glutting the town, then just as suddenly gone.

Aha, I thought one day: a metaphor. Or maybe I meant microcosm, or both. I began to realize that this might be a good premise for a novel, the classic setting of an enclosed human system traveling through and stuck in a vast impersonal wilderness.

All three of my main characters presented themselves more or less simultaneously as soon as I started mulling over the best way to tell this story—I wanted access to all parts of the boat, so I needed a passenger, an entertainment crew member, and a belowdecks worker. And there were Christine, Miriam, and Mick, arising pretty much fully formed in my imagination.

RGC: Are there any characters or aspects of the book that feel particularly personal to you?

KC: I wanted to embody and express fictionally the foreboding I felt about our country in the year and a half leading up to the 2016 presidential election. My fears about the current political landscape as well as the global climate crisis are on every page—my sense that we are, as a planet, trembling at the top of a cresting wave that renders moot all of our interpersonal, personal, and societal preoccupations. Nature will win in the end—that’s at the heart of this book and its major overarching idea.

RGC: What makes this a good (or maybe not so good) cruise ship read?

KC: Ron Charles of The Washington Post began his review, “Please don’t take Kate Christensen’s new novel on your next Carnival Cruise.” That is very good advice! This would be a terrible read on a cruise. I won’t give any spoilers here, so I will leave it at that.

KC: These days, I’m feeling very nostalgic for mid-twentieth-century America, an era that was over before I was born, so I invented the kind of cruise I’d most like to go on, if I ever went on one, which I won’t. I loved creating that atmosphere—fine dining, classic cocktails, jazz, and torch songs. I sent my characters out to sea in a time-warp bubble in which it was 1957 again—but the sea they’re sailing on is a twenty-first-century ocean, filled with plastic and toxins, as well as strange new weather patterns, rogue waves, and intense storms.

RGC: You took a break from literary novels for a few years to write two food memoirs. What was it like returning to fiction?

KC: It was both difficult, because writing a novel is always difficult, and an immense joy. Fiction is where I live, so it was like coming home from an extended vacation. (Not a cruise, though.)

RGC: Did you find that your approach to writing novels changed after writing memoirs?

KC: I think my sentences may have become plainer, more direct, as a result of writing about myself directly. I’m interested in telling the bare, blunt truth above all else.

RGC: Can you describe your typical writing process? Did your process for writing The Last Cruise differ at all?

KC: I do puzzles and play games to warm up my brain for writing—online Scrabble and crosswords, logic puzzles and word games. They feel to me akin to finger exercises for a musician.

RGC: If you were to pose one question to book clubs discussing The Last Cruise, what would you ask and why?

KC: My question would be: If you hate the ending, you’re not alone and I apologize—I wish I hadn’t had to end it that way, but it was the only true ending I could imagine for the book, given its underlying themes and preoccupations, and our current reality. My question is, if you can put aside your disappointment in the lack of resolution, why do you think this is?