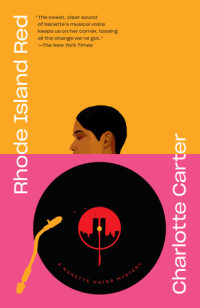 Originally published in the 1990s, Rhode Island Red by Charlotte Carter is a pioneering work of detective fiction. Along with being a delightful and subversive take on the noir genre, it tackles topics of racism and sexism head on, making it an incredibly fresh and relevant read today. Catapult Magazine raves, “Carter’s characters rarely do what one might expect. Reading her work just gives you a jolt.”

In honor of the new Vintage Crime/Black Lizard edition, we’ve asked Carter a few questions about her writing process, inspiration for her beloved protagonist Nanette Hayes, and what exactly drew her to mysteries in the first place. Enjoy!

Reading Group Center: Nanette Hayes is such a memorable character. How did you approach writing her character and what inspiration did you draw from?

Charlotte Carter: Creating a character much younger than I was an interesting challenge. Even so, in that she has so much respect and reverence for her musical forebears, Nan has ties to a past not exactly her own, a past that goes back way before she was born. I think I’ve always been like that too—not just admiring the musicians of a bygone era, but constantly thinking about what life—  the great and the awful parts of it—must have been like for them. Maybe always feeling the weight of the past is particular to black people. I don’t know. It isn’t always burdensome, it’s often glorious, but somehow, it’s always there.

As to the inspiration for a girl saxophonist, I saw such a young woman on the street once and thought it was so unusual that I started thinking about what her life might be like. Then, at my late husband’s urging, I just began in my head to fill in the other parts of her life and start writing about her.

RGC: Can you describe your typical writing process? Did it differ between Rhode Island Red and any of the other books you have published?

CC: First of all, I am 1) lazy as hell and 2) just not capable of sticking to a routine: get up at 7, write till 11, that sort of thing. That said, for me it’s a matter of being taken with characters in the same way I want the reader to be taken with them. I think a lot about, for instance, what they find funny. Make notes about what they eat and what public figures they might love or hate. And of course, you have to keep thinking about the story you need to tell. I guess there is no one process. Anyway, it’s a back and forth thing with me; some days it’s a slog and some days you can’t wait to get at it. You just have to hope the slog doesn’t show in the writing.

Well, of course I had to hew to a plot in Rhode Island Red and the other Nanette books, because there had to be a working out of the puzzle, a solution to the murders. But the one-off novel, Walking Bones, I look at as kind of a twisted poem, or maybe a song. I mean, it’s mostly various characters presenting themselves, and riffing on the other characters. The stand-alone novel I’m working on now is a kind of ghost story where the cast of characters tell the story to the reader as they talk to one another. I hope it’s not pretentious to call both of those books a bit experimental. That kind of approach is much more natural to me than following an outline.

RGC: Rhode Island Red was originally published in the 90s, but still feels so relevant today. Why do you think it has passed the test of time, and how does it feel to revisit these characters again twenty years later?

CC: First, I’m glad if it holds something for what is pretty much another generation of readers. Maybe there are more people than I realized who, like me, aren’t themselves musicians but are invested in music, to the degree that they can’t imagine life without it. I’m not quite done writing about Nanette, and I am still trying to saturate the dialogue with that kind of awareness and that jump and that joy.

RGC: What has drawn you to the mystery/noir genre? Have any other writers influenced your work?

CC: Probably an early fascination with films in that genre. What’s the expression?—Born this way.  Staying up late as a kid to watch The Big Heat or Laura or Out of the Past on TV. That sort of thing. I owe such a debt to my mother for not making me go to bed at any particular time of the night. And then, in college, tossing around the names of the great black and white cinematographers and dismissing anyone who didn’t know who John Alton was. I’m joking about that last bit, of course; I never did any such thing.

I would think that nearly every mystery writer I’ve read has influenced me, that is, provided me with something I could lift. The list of the ones I love just keeps growing. I will say it’s been great these last twenty years to find all the terrific ones from other cultures—the Irish ones, the Scottish ones, the South African ones, the Australians, certainly the Scandinavians, etc.

RGC: Imagine you’re part of a book club discussing Rhode Island Red. What is a topic or question you would like to pose to the group?

CC: I might ask if anything—or anyone—in the book is just too much. Doing a bit of cutting and revising of the Nanette books, I found some stuff that was just too too much. I hope it’s gone now.

CC: It wasn’t exactly said as advice, but a poet I knew used to talk about the necessity to impart information in any kind of work. I don’t find anything wrong with that. It can mean so many things, because there’re so many kinds of information. I always think fondly of my jazz-obsessed uncle and his friends who would start sentences with “Are you hip to . . .” Or “Let me hip you to . . .”

As to reading, if there weren’t people who tell me “you have to read so-and-so’s memoir, or so-and-so has a fascinating book about whatever,” I would probably read nothing but mysteries. Not proud of it, just stating a fact.