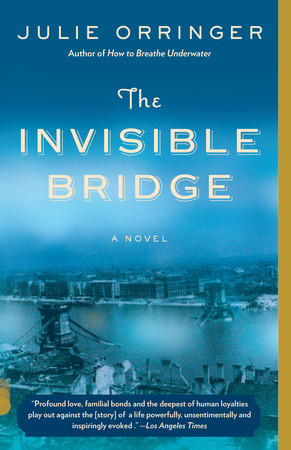 The questions, topics for discussion, and suggestions for further reading that follow are designed to enhance your group’s discussion of The Invisible Bridge, a sweeping novel of World War II told through the story of one family, their loves, and their losses. Julie Orringer, the author of the bestselling short-story collection How to Breathe Underwater, brings their world to life with astonishing power and insight.

The Invisible Bridge opens in September 1937 as Andras Lévi leaves his brother Tibor to study abroad. Andras has a scholarship at architecture school in Paris, while Tibor remains in Hungary until he too is granted entrance to medical school in Italy. At the École Spéciale, Andras is one of a small number of Jewish students. He had experienced anti-Semitism in Hungary and feels it in Paris as well, but when a new Hungarian law forbids granting scholarships to Jews studying abroad, he comes face-to-face with the tide of ethnic hatred spreading throughout Europe. A job at a theater run by a fellow Hungarian gives Andras just enough money to stay in school—and leads him to Klara Morgenstern, a beautiful and enigmatic Hungarian émigré. Despite Klara’s secretiveness about her past, their love flourishes and survives a risky return to Hungary in the late summer of 1939. Tibor, forced to leave Italy when his visa expires, returns to Hungary with his Italian wife. As a German ally, Hungary is quickly building up its military forces, and soon after the beginning of the Second World War, Andras, Tibor, and their younger brother, Mátyás, are drafted into the Hungarian Labor Service, which supports the country’s army.

As Hitler’s armies march across Europe, the brothers and their families in Budapest see their world disintegrate. Amid reports of mass killings of Jews in Eastern Europe, they grasp at the possibility of emigrating to Palestine. But their dream of escape seems to perish, first in 1942 when Andras is deported to the Ukraine and then finally in 1944 when German troops flood into Hungary and impose their virulent anti-Semitic agenda. Jews throughout the country are corralled into bleak ghettoes or deported to concentration camps. Andras, Tibor, and the other Jewish men in the Hungarian Labor Service are designated prisoners of war and packed into boxcars for transport to work camps. In the turmoil that follows the Soviet advance into Hungary, the brothers lose track of one another. After months of horror, Andras is liberated by Soviet troops and returns to Budapest to face what the war has cost his family and his beloved country.

An intricate mélange of historical events and personal dramas, The Invisible Bridge is a stunning portrait of a world at war and an unforgettable story of love, courage, and survival.

1. What does the opening chapter establish about the cultural and social milieu of prewar Budapest? What do Andras’s reactions to the Hász household reveal about the status of Jews within the larger society? How do the differences between the Hász and Lévi families affect their assumptions and behavior during the war? Which scenes and characters most clearly demonstrate the tensions within the Jewish community?

2. Why do Andras and his friends at the École Spéciale tolerate the undercurrent of anti-Semitism at the school even after the verbal attack on Eli Polaner (pp. 48–50) and the spate of vandalism against Jewish students (p. 118)? To what extent are their reactions shaped by their nationalities, political beliefs, or personal histories? Why does Andras agree to infiltrate the meeting of Le Grand Occident (pp. 121–27)? Is his belief that “[the police] wouldn’t deport me . . . Not for serving the ideals of France” (p. 128), as well as the reactions of Professor Vago and Andras’s father to the German invasion of Czechoslovakia (p. 337) naïve, or do they represent widespread opinions and assumptions?

3. Andras and Klara’s love blossoms against the background of uncertainties and fear. Is Klara’s initial lack of openness about her background justified by her situation? Why does she eventually begin an affair with Andras? Are they equally responsible for the arguments, breakups, and reconciliations that characterize their courtship? Do Klara’s revelations (pp. 270–96) change your opinion of her and the way she has behaved?

4. Despite the grim circumstances, Andras and Mendel produce satirical newspapers in the labor camps. What do the excerpts from The Snow Goose (p. 419), The Biting Fly (pp. 457–58), and The Crooked Rail (p. 454–55) show about the strategies that helped laborers preserve their humanity and their sanity? What other survival techniques do Andras and his fellow laborers develop?

5. In Budapest, the Lévi and Hász families sustain themselves with small pleasures, daily tasks at home, and, in the case of the men, working at the few jobs still available to Jews (pp. 446–50, 464–78, and 514–21). Are they driven by practical or emotional needs, or both? Does the attempt to maintain ordinary life represent hope and courage, or a tragic failure to recognize the ever-encroaching danger? What impact do the deprivations and degradations imposed by the Germans have on the relationship between the families? Which characters are the least able or willing to accept the threats to their homeland and their culture?

6. What details in the descriptions of Bánhida (pp. 451–61 and 498–506), Turka (pp. 618–638), and the transport trains (pp. 709–19) most chillingly capture the cruelty perpetrated by the Nazis? In addition to physical abuse and deprivation, what are the psychological effects of the camps’ rules and the laws imposed on civilian populations?

7. General Martón in Bánhida (pp. 506–11), Captain Erdó, and the famous General Vilmos Nagy in Turka all display kindness and compassion. Miklós Klein engages in the tremendously dangerous work of arranging emigrations for fellow Jews (pp. 536–37). What motivates each of them to act as they do? What political ideals and moral principles lie at the heart of Nagy’s stirring speech to the officers-in-training (pp. 641–43)? (Because of his refusal to support official anti-Semitic policies, Nagy was eventually forced to resign from the Hungarian Army; in 1965, he was the first Hungarian named as a Righteous Among the Nations by the Yad Vashem Institute.)

8. Why does Klara refuse to leave Budapest and go to Palestine (p. 647–48)? Is her decision the result of her own set of circumstances, or does it reflect the attitudes of other Jews in Hungary and other countries under Nazi control?

9. “He could no sooner cease being Jewish than he could cease being a brother to his brothers, a son to his father and mother” (p. 57). Discuss the value and importance of Jewish beliefs and traditions to Andras and other Jews, considering such passages as Andras’s feelings in the above quotation and his thoughts on the High Holidays (pp. 253–57); the weddings of Ben Yakov and Ilana (pp. 323–24) and of Andras and Klara (p. 401–2); the family seder in wartime Budapest (pp. 446–50); and the prayers and small rituals conducted in work camps.

10. The narrative tracks the political and military upheavals engulfing Europe as they occur. What do these intermittent reports demonstrate about the failure of both governments and ordinary people to grasp the true objectives of the Nazi regime? How does the author create and sustain a sense of suspense and portending disaster, even for readers familiar with the ultimate course of the war?

11. Throughout the book there are descriptions of Andras’s studies, including information about his lessons and the models he creates and detailed observations of architectural masterpieces in Paris. What perspective does the argument between Pingsson and Le Corbusier offer on the role of the architect in society (pp. 354–47)? Whose point of view do you share? What aspects of architecture as a discipline make it particularly appropriate to the themes explored in the novel? What is the relevance of Andras’s work as a set designer within this context?

12. Andras’s encounters with Mrs. Hász (p. 7) and with Zoltán Novak (pp. 23–24) are the first of many coincidences that determine the future paths of various characters. What other events in the novel are the result of chance or luck? How do the twists and turns of fortune help to create a sense of the extraordinary time in which the novel is set?

13. Does choice also play a significant role in the characters’ lives? What do their decisions—for example, Klara’s voluntary return to Budapest; György’s payments to the Hungarian authorities; and even József’s attack on Andras and Mendel (p. 625)—demonstrate about the importance of retaining a sense of independence and control in the midst of chaos?

14. The Holocaust and other murderous confrontations between ethnic groups can challenge the belief in God. Orringer writes, “[Andras] believed in God, yes, the God of his fathers, the one to whom he’d prayed . . . but that God, the One, was not One who intervened in the way they needed someone to intervene just then. He had designed the cosmos and thrown its doors open to man, and man had moved in. . . . The world was their place now” (p. 549). What is your reaction to Andras’s point of view? Have you read or heard explanations of why terrible events come to pass that more closely reflect your personal beliefs?

15. What did you know about Hungary’s role in World War II before reading The Invisible Bridge? Did the book present information about the United States and its allies that surprised you? Did it affect your views on Zionism and the Jewish emigration to Palestine? Did it deepen your understanding of the causes and the course of the war? What does the epilogue convey about the postwar period and the links among past, present, and future?

16. “In the end, what astonished him most was not the vastness of it all—that was impossible to take in, the hundreds of thousands dead from Hungary alone, and the millions from all over Europe—but the excruciating smallness, the pinpoint upon which every life was balanced” (p.709). Does The Invisible Bridge succeed in capturing both the “vastness of it all” and the “excruciating smallness” of war and its impact on individual lives?

17. Why has Orringer chosen “Any Case” by the Nobel Prize–winning Polish poet Wislawa Szymborska as the coda to her novel? What does it express about individuals caught in the flow of history and the forces that determine their fates?

Julie Orringer is the author of the New York Times Notable Book How to Breathe Underwater and the recipient of a fellowship from the National Endowment for the Arts. She lives in Brooklyn, New York.