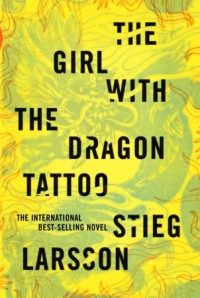 For the last three years, Stieg Larsson and his Millennium trilogy have been at the heart of our summer publishing list. According to The New York Times, it has sold 27 million copies in forty countries. His protagonist Lisbeth Salander has haunted Knopf’s imagination: she even has her own Facebook account, and her own fan club of dopplegängers. The bound galleys and ARCs of each Larsson title have become a commodity to be traded or begged for by all our Random House colleagues. We have all held our breath in anticipation for the final adventure, wondering what troubles Blomkvist and Salander might find themselves in next. Now, with our edition of the final chapter of their saga on sale, with sad acceptance we will say farväl.

The Millennium trilogy has been translated many times over, and our fellow publishers around the globe have reimagined each jacket or cover in dozens of ways. Revisiting the rest of the world’s interpretations of Larsson’s favorite computer hacker and lothario reporter, I noticed a trend in the various covers for The Girl with the Dragon Tattoo:

Salander and the dragon tattoo seem to be the two dominant elements across all these covers. Odd, since the original title of the first book in the trilogy is Men Who Hate Women. There are many rumors as to why the title was changed, but ultimately, Knopf chose to go with The Girl with the Dragon Tattoo to highlight Salander, who is the character at the heart of the trilogy. Her appearance in the first book was minor compared with her next two adventures, but once she made her appearance on the canvas, you never forget her.

Despite the name change, we didn’t choose to put her on the cover of our edition. Peter Mendelsund, the jacket designer for all three books in the series, took a different approach. He decided to shift away from the more traditional murder-mystery vibe of the foreign editions, instead providing a neon yellow in-your-face punch, a jolt of energy comparable to what Salander brings to the narrative.

In our many discussions, Peter points out Salander is not the central character in this book, it’s Mikael Blomkvist. Blomkvist’s mission is to find the long-missing Harriet Vanger who disappeared as a child, but instead he finds Salander. Harriet appears long before Salander, so to avoid the confusion about which girl is the title character and the cliché of the locked-room mystery cover, Peter chose to use a more abstract, but bold, image.

Knopf’s twist was achieved with the subtle interaction of the Trade Gothic type and a great piece of art in yellow and orange Day-Glo inks. Add a dash of cyan (shades of colors in the blue/green spectrum) to create the green dragon lurking in the background and a tablespoon of black for the title, flap copy, and Stieg’s photo, and voilà!

The Girl with the Dragon Tattoo’s jacket colors create an unconscious sense of danger, flashing a warning to readers to proceed with caution, as they may find this story dangerous, seductive, and gripping. Once it has you, there is no exit, no U-turn. The use of the dragon imagery on the jacket might seem incongruous with we know of Sweden, but the dragon cues us to the underlying differences between what we know and the author wants to show us. Larson’s Sweden is not place just filled with coffee shops, cold vistas, and IKEAs. It is a place where women and children are victims of powerful men and the system punishes those who are different or who deviant from the norm. Salander’s tattoo is as jarring as she is within the context of the pseudo-sanitized Swedish setting. The combination of the dragon’s symbolism and the flashy garishness of the neon colors clue us into the dark and spiraling adventure of Larsson’s thriller.

Can you imagine other cover possibilities for The Girl with the Dragon Tattoo?  Peter was gracious enough to provide some of his other ideas for title image:

What do you think? Would your experience reading the book have been drastically different with one of these cover images? Should we have included our own version of Salander, as several foreign publishers have chosen to do? What sorts of things would you have wanted to see to reflect the power of this story? Let us know!