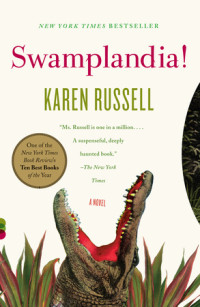 Our congratulations to Karen Russell, whose Swamplandia! has been named a 2012 Pulitzer Prize Finalist for Fiction. Denis Johnson and the late David Foster Wallace were also named as finalists. Swamplandia! tells the story of thirteen-year-old Ava Bigtree’s quest to save her family’s island home and gator-wrestling theme park. Against a backdrop of hauntingly fecund plant life animated by ancient lizards and lawless hungers, Karen Russell’s debut novel is an arrestingly beautiful and inventive work.

As the New York Times reports, the Pulitzer committee has declined to select a winner for the 2012 prize.