Books Set in Italy for Every Taste 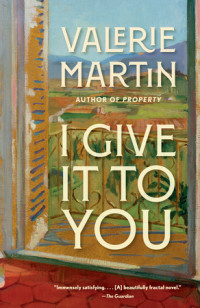 Rome and Florence, art and history, pasta and wine, romance and intrigue—Italy has so much to offer and has always been one of our favorite places to escape, even if it’s just within the pages of a good book. Whatever you’re looking for—mystery, memoir, love story, or classic—we have a book set in Italy that’s just right for you! Ciao, ciao!

I Give It to You by Valerie Martin

“A novel of philosophical and creative inquiry, cleverly plotted and packed with great characters.” —The Guardian

When Jan Vidor, an American writer and academic, rents an apartment in a Tuscan villa for the summer, she plans to spend her break working on a novel about Mussolini. Instead, she finds herself captivated by her aristocratic landlady, the elegant, acerbic Beatrice Salviati Bartolo Doyle, whose family has owned Villa Chiara for generations. Jan is intrigued by Beatrice’s stories of World War II, particularly by the tragic fate of her uncle Sandro, who was mysteriously murdered in the driveway of the villa at the conclusion of the war. Day by day, Beatrice makes Jan privy to her family history.

As years go by and the friendship is sustained by infrequent meetings, Jan finds she can’t resist writing Beatrice’s story. But as she works on the novel, it becomes clear that the villa itself is at risk and that Beatrice is incapable of saving it. Jan understands that she is telling the story of a catastrophe her friend might prefer to conceal. She presses on.

“An intriguing tale of Bohjalian complexity. . . . Portrays life in German-occupied Italy with historical detail but gives it a human face.” —The Miami Herald

Paul Stuart, a renowned food writer, finds himself at loose ends after his longtime girlfriend leaves him for her personal trainer. To cheer him up, Paul’s editor, Gloria, encourages him to finish his latest cookbook on-site in Tuscany, hoping that a change of scenery (plus the occasional truffled pasta and glass of red wine) will offer a cure for both heartache and writer’s block. But upon Paul’s arrival, things don’t quite go as planned. A mishap with his rental-car reservation leaves him stranded, until a newfound friend leads him to an intriguing alternative: a bulldozer.

With little choice in the matter, Paul accepts the offer, and as he journeys (well, slowly trundles) into the idyllic hillside town of Montalcino, he discovers that the bulldozer may be the least of the surprises that await him. What follows is a delightful romp through the lush sights and flavors of the Tuscan countryside, as Paul encounters a rich cast of characters, including a young American woman who awakens in him something unexpected.

“If you’ve ever thought about quitting your job, moving to Italy, wearing incredible clothes and eating unbelievable food, here’s your bible.” —Fodors

Kamin Mohammadi, a magazine editor in London, should have been on top of the world. But after heartbreak and loneliness, the stress of her “dream life” was ruining her physical and mental health. Gifted a ticket to freedom—a redundancy package and the offer of a friend’s apartment in Florence—Kamin took a giant leap. It did not take her long to notice how differently her new Italian neighbors approached life: enjoying themselves, taking their time to eat and drink, taking their lives at a deliberately slower pace. Filled with wonderful characters—from the local bartender/barista who becomes her love advisor to the plumbers who fix her heating and teach her to make pasta al pomodoro—here is a mantra for savoring the beauty and color of every day that Italians have followed for generations, a guide to the slow life for busy people, a story of finding love (and self-love) in unlikely places, and an evocative account of a year living an Italian life.

The Malice of Fortune by Michael Ennis

“Like the best historical fiction, the novel transports the reader entirely elsewhere.” —Time Out Chicago

When Pope Alexander orders the courtesan Damiata to the remote fortress city of Imola to learn the truth behind the murder of his beloved son, Juan, she knows that failure comes at the price of her own child’s freedom.

However, a string of gruesome murders have left Imola’s residents too gripped by fear to help a lone woman. Enlisting the aid of the obscure Florentine diplomat Niccolò Machiavelli and the eccentric military engineer Leonardo da Vinci, Damiata sets off to decipher the killer’s taunting riddles: she with her street smarts, Leonardo with his groundbreaking “science of observation,” and Machiavelli with his new “science of men.”

Harvard professor of symbology Robert Langdon awakens in an Italian hospital, disoriented and with no recollection of the previous thirty-six hours, including the origin of the macabre object hidden in his belongings. With a relentless female assassin trailing them through Florence, he and his resourceful doctor, Sienna Brooks, are forced to flee. Embarking on a harrowing journey, they must unravel a series of codes, which are the work of a brilliant scientist whose obsession with the end of the world is matched only by his passion for one of the most influential masterpieces ever written, Dante Alighieri’s The Inferno.

A Room with a View by E. M. Forster

First published in 1908, A Room with a View portrays the love of a British woman for an expatriate living in Italy. Caught up in a world of social snobbery, Forster’s heroine, Lucy Honeychurch, finds herself constrained by the claustrophobic influence of her British guardians, who encourage her to take up with a well-connected boor. In the end, however, Lucy takes control of her own fate and finds love with a man whose free spirit reminds her of “a room with a view.”

Italian Police Commissioner Aurelio Zen is dispatched to investigate the kidnapping of Ruggiero Miletti, a powerful Perugian industrialist. But nobody much wants Zen to succeed: not the local authorities, who view him as an interloper, and certainly not Miletti’s children, who seem content to let the head of the family languish in the hands of his abductors—if he’s still alive. Was Miletti truly the victim of professionals?  Or might his kidnapper be someone closer to home: his preening son Daniele, with his million-lire wardrobe and his profitable drug business? His daughter, Cinzia, whose vapid beauty conceals a devastating secret? The perverse Silvio, or the eldest son, Pietro, the unscrupulous fixer who manipulates the plots of others for his own ends? As Zen tries to unravel this rat’s nest of family intrigue and official complicity, Michael Dibdin gives us one of his most accomplished thrillers.

If on a Winter’s Night a Traveler by Italo Calvino

“One of the world’s best fabulists.” —The New York Times Book Review

Based on a witty analogy between the reader’s desire to finish the story and the lover’s desire to consummate his or her passion, If on a Winter’s Night a Traveler is the tale of two bemused readers whose attempts to reach the end of the same book—If on a Winter’s Night a Traveler by Italo Calvino, of course—are constantly and comically frustrated. In between chasing missing chapters of the book, the hapless readers tangle with an international conspiracy, a rogue translator, an elusive novelist, a disintegrating publishing house, and several oppressive governments. The result is a literary labyrinth of storylines that interrupt one another—an Arabian Nights of the postmodern age.