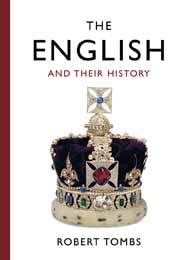 Tags: British history, English and Their History, history of England, Knopf, Robert Tombs
Posted in Media Center, Not on Homepage | No Comments »