One of the many joys of social media is how easy it is for readers to connect with the authors they love. Through Twitter, Instagram, Facebook, and more, we’re lucky to get a peek into the daily lives of the writers whose work we can’t get enough of. Kevin Kwan, author of the wickedly funny Crazy Rich Asians and China Rich Girlfriend, snaps great pictures of his travels as well as more intimate moments on Instagram. We asked him to share the stories behind some of his favorite photos to celebrate the paperback release of China Rich Girlfriend. Keep reading to discover the tales behind these captured moments and don’t forget to follow Kevin at @kevinkwanbooks! 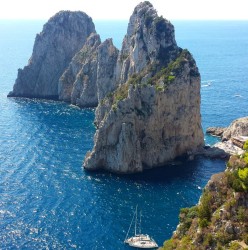 In New York, my life moves at such a fast pace that I rarely have time to get my phone out for a snapshot.  But when I’m traveling, it’s a different story, and I find myself taking and posting pictures nonstop.  One of my favorites is this one taken during an arduous cliffside hike on the island of Capri.  I had no idea that the trail would be so steep and involve climbing up hundreds of ancient steps, but it was worth it for the breathtaking views of the sparkling Mediterranean and the dramatic Faraglioni rock formations. Incidentally, this was a hike that one of my favorite poets, Pablo Neruda, would take every day when he lived on Capri. 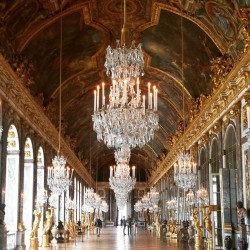 As exhausting as the cliffside hike was, it paled in comparison to the effort it took to capture the second picture of Versailles’ legendary Hall of Mirrors.  A Parisian friend recommended that I be first in line when the palace opened and to make a beeline for the hall so I could experience it as it should be—in the morning light without any crowds.  So when the doors opened, I sprinted through the palace, ignoring the other rooms.  My reward was being able to stand in the middle of the glorious space almost completely alone.  For a brief moment, I could almost believe that I was Louis XIV, enjoying the tranquillity of my private palace.  Fifteen minutes later, the room was packed wall-to-wall with tourists. 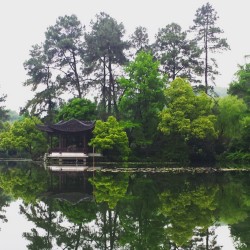 Traveling also inspires my writing tremendously.  When I was in Shanghai doing research for my novel China Rich Girlfriend, I took a trip to Hangzhou, the lakeside city that has been the summer retreat of Chinese Emperors for over three thousand years.  During a boat ride on the West Lake, I found myself becoming seduced by the stillness of the water and exquisite landscape shrouded in the dawn mist.  I went back to my hotel room and wrote an entire chapter where the heroine of my book visits Hangzhou and experiences a life-changing moment that profoundly affects the rest of the story. 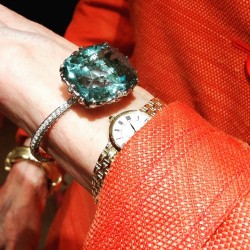 Then there are the pictures that tell the story of some unforgettable moments.  One day in New York, I was invited with a friend to view the extraordinary jewelry collection of Munnu/The Gem Palace.  Designer Siddharth Kasliwal, whose family has run the famed jeweler in Jaipur, India, for nine generations, brought out tray after tray of the world’s rarest jewels. This image shows my friend trying on a ridiculously large aquamarine perched atop a bracelet of diamonds. She called it “an engagement ring for the wrist,” 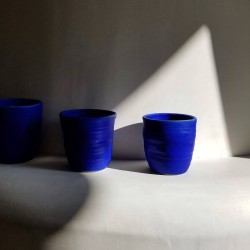 and we laughed and laughed as we sat surrounded by millions of dollars of incredible treasures.

Some of my favorite pictures aren’t necessarily the most “wow” moments.  Yesterday, for instance, I passed by a shop in Los Angeles and ended up buying four ceramic cups that were glazed a brilliant hue of Yves Klein blue.  When I got home, I placed them on a shelf and took a picture.  The sunlight streaming through the window created a dramatic shadow, and I love the resulting image.  Even in the midst of everyday life, there’s magic in the mundane.