Much of Peter Carey’s latest novel, A Long Way from Home, takes place on the rough-and-tumble course of the 1954 Redex Trial. Husband-and-wife team, Irene and Titch Bobs, enter the weeks-long endurance contest in the hopes of winning bragging rights and enough acclaim to establish their very own car dealership. What in the world is the Redex Trial, you ask? We had no idea, either, so we did some digging . . . and were fascinated by what we found!

The first Redex Reliability Trial, as it came to be known, was held in 1953 and was sponsored by Redex Fuel Additives to promote their products and show that even an average family car could handle the toughest terrain Australia had to offer. The race occurred annually—though covering different ground and with different sponsors after 1955—through 1958 and then sporadically until 1998.

The 1954 race, in which the Bobs family competes, carried a prize of £2,000 and started and ended in Sydney with stops in Brisbane, Rockhampton, Mackay, Townsville, Mount Isa, Darwin, Broome, Meekatharra, Madura, Adelaide, and Melbourne. It covered 9,600 miles and went farther into western Australia than the previous race. 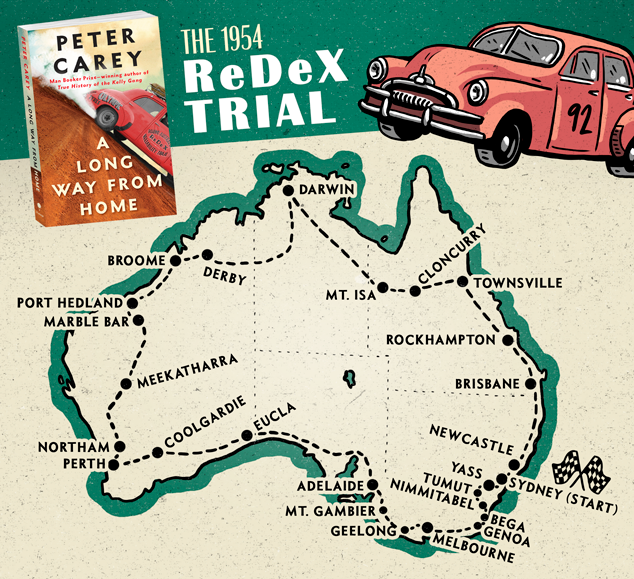 The racers of the 246 cars (only 127 of them had qualifying finishes) included a famous radio personality and quite a few women, including an all-female team from Women’s Weekly. The trial proved to be a big to-do throughout Australia, covered doggedly by the press and with crowds turning up to cheer the teams on at stops along the way. News teams covered all the drama of the race as it happened, risking the treacherous roads themselves to give the public a taste of the terrifying conditions that most city-dwellers couldn’t even imagine. We came across some of this newsreel footage and felt instantly transported to the time and place Carey writes about. Watch it below and see if you can imagine Irene, Titch, and their neighbor/navigator, Willie, driving up to the starting line and bumping along the unpaved roads along with the other competitors.