WHAT: THE GOLDEN LEGEND, a novel

WHERE: The story is set in an imaginary city in Pakistan.

WHY: “An aching, lyrical story of schisms
and secrets in present-day Pakistan.
Tucked away inside Aslam’s quietly unwinding narrative are snippets of and allusions to religious tales that speak to the wisdom of earlier days—the title itself is one of them—against the unwisdom of our own. Brooding and beautiful: a mature, assured story of the fragility of the world and of ourselves.”
—KIRKUS, a starred review

“An exquisite, luminous novel.
“Nargis, an architect, has lost her husband, Massud, to a rogue American bullet, which hit him as he passed books in a human chain to a new library that he and Nargis designed. Their Christian ex-servant, Lily, and his daughter, Helen, whom Nargis and Massud have nurtured intellectually and whose mother was murdered by a Muslim, live next door. Helen falls in love with a Kashmiri named Imran, who turns up at Nargis’s house one day, having escaped from a group of jihadists with whom he trained.
“Bigotry frequently erupts into violence in their district, and each of these characters will suffer. Nargis is pressured by a military intelligence agent to forgive her husband’s murderer for blood money. Helen is pursued for blasphemous journalism. Lily, a Christian, and his lover, the widowed daughter of a local Muslim cleric, are exposed and pursued by a mob, which burns down their neighborhood. Lily disappears, and Nargis, Helen, and Imran flee to a secluded island, where they begin a strange but lovely idyll of love and friendship that sharply contrasts with what surrounds them. Hidden, the three lovingly repair a book written by Massud’s father that was torn to pieces by the authorities, using golden thread to stitch its pages together again.
“The Pakistan depicted in this harrowing novel is unbearably wrenched apart by terror and prejudice, but the dignity of Aslam’s characters and their devotion to one another rises far above the violence.” —PUBLISHERS WEEKLY, a starred review 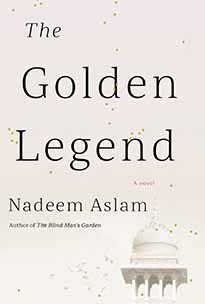