“How Have I Not Read This?” November Book Club Pick 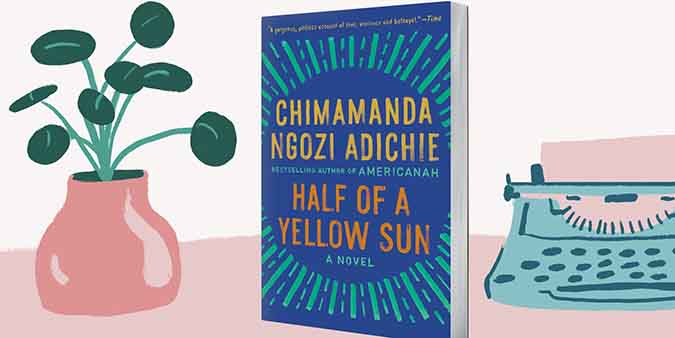 First published in 2006, Half of a Yellow Sun won the Women’s Prize for Fiction (previously called The Orange Prize) and was a National Book Critics Circle Award Finalist and a New York Times Notable Book. On November 12, 2020, it was announced as the Winner of Winners, voted by the public as the best book to have won the Women’s Prize in its twenty-five year history.

This haunting story of love and war illuminates a seminal moment in modern African history: Biafra’s impassioned struggle to establish an independent republic in southeastern Nigeria during the late 1960s. We experience this tumultuous decade through five unforgettable characters: Ugwu, a thirteen-year-old houseboy who works for Odenigbo, a university professor full of revolutionary zeal; Olanna, the professor’s beautiful young mistress who has abandoned her life in Lagos for a dusty town and her lover’s charm; and Richard, a shy young Englishman infatuated with Olanna’s willful twin sister, Kainene. This tremendously evocative novel is a new modern classic of the promise, hope, and disappointment of war. Chimamanda Ngozi Adichie will discuss the book with award-winning novelist Esi Edugyan.

Find out more about the book, read an excerpt, and print a reading group guide.

• Hosted in partnership with Changing Hands Bookstore. You can order Half of a Yellow Sun from them HERE.

CHIMAMANDA NGOZI ADICHIE is the author of award-winning and bestselling novels including Americanah and Half of a Yellow Sun; the story collection The Thing Around Your Neck; and the essay We Should All Be Feminists. Her books have won the National Book Critics Circle Award, the Orange Prize, the Commonwealth Writers’ Prize, and the Hurston/Wright Legacy Award, and have been translated into more than thirty languages. A recipient of a MacArthur Fellowship, she divides her time between the United States and Nigeria.

ESI EDUGYAN’s most recent novel, Washington Black, was shortlisted for the Man Booker Prize, named one of the Ten Best Books of the Year by The New York Times, and was an international bestseller. She is also the author of the novels The Second Life of Samuel Tyne and Half-Blood Blues, which won the Scotiabank Giller Prize and was a finalist for the Man Booker Prize, the Governor General’s Literary Award, the Rogers Writers’ Trust Fiction Prize, and the Orange Prize. She lives in Victoria, British Columbia.