Media Center: ‘At the Strangers Gate’ by Adam Gopnik

WHAT: AT THE STRANGERS’ GATE:
Arrivals in New York

WHY: “A riveting and incandescent chronicle.
“When Gopnik, an award-winning New Yorker staff writer and author, arrived in New York with the love of his life in 1980, he was all set to earn a graduate degree in art history and write ‘wry essays’ and ‘witty lyrics’ à la Gershwin. His academic and creative dreams collided, inevitably, with fiscal realities, setting up a classic template for a ‘how I survived and succeeded memoir.’ But Gopnik takes it further.
“By virtue of his exceptional observational and analytical powers, acute emotional and moral exactitude, and charmingly rueful sense of humor, he turns in a riveting and incandescent chronicle of personal evolution vividly set within the ever-morphing, cocaine-stoked crucible of ferocious ambition that was 1980s Manhattan. He tells tales of the forging of a marriage; of nightmarish apartment battles with verminous hordes; of fortuitous jobs at museums, men’s fashion magazines, and a book publisher; and of bonds developed with critic Robert Hughes, artist Jeff Koons, and, most profoundly, photographer Richard Avedon.
“Arabesque, captivating, self-deprecating, and affecting, Gopnik’s cultural and intimate reflections, in league with those of Alfred Kazin and Joan Didion, are rich in surprising moments and delving perceptions into chance, creativity, character, style, conviction, hard work, and love.”
–Donna Seaman, in a starred review for BOOKLIST

“Gopnik moves masterfully between humorous, poignant minutiae of private experience and a macro view of New York City throughout the 1980s.”
–PUBLISHERS WEEKLY 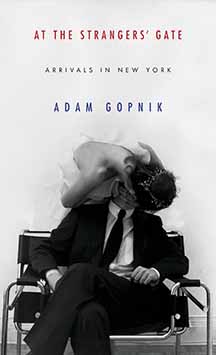