Media Center: ‘What Is It All but Luminous’ by Art Garfunkel

WHAT: WHAT IS IT ALL BUT LUMINOUS:
Notes from an Underground Man

WHY: “Sensitive, soulful, sharp-tongued, and serious.
“At an early age, Art Garfunkel wowed his classmates, including Paul Simon, with the voice of an angel. The two spent a lot of time listening to records and singing, scoring a national hit as Tom & Jerry in 1957 while still in high school. Later, they achieved stellar fame and fortune as Simon & Garfunkel.
“’My life, so far, is a two-act play,’ Garfunkel writes, ‘Bridge over Troubled Waters ended Act I.’ This covers Act II, from Garfunkel’s substantial solo career to his many meditative walks across America and Europe and his intense love for his family. Instead of a conventional memoir, he presents lists and prose poetry in an impressionistic, lyrical, and sometimes whimsical take on fame, singing, and aging. ‘I walk for simplicity, to empty out, to come about,’ he writes, and he sings, ‘“Ol’ Man River’ to cows. He reveals a sibling-like rivalry with Simon and claims that they were ‘conceived at the same instant,’ pondering, ‘who will speak at whose funeral?'”
–Ben Segedin, BOOKLIST

“The silky voiced singer looks back on his career and life.
This singular mixture of verse, doggerel, blog and diary entries, soul-baring confession, and lists of hundreds of books read is less about setting the record straight on Simon and Garfunkel than allowing readers to gaze into the poetic soul of an artist.”
–KIRKUS REVIEWS 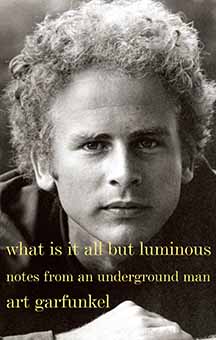 From the beginning of the book:
I grew up near Jewel Avenue and Main Street in the borough of Queens in New York, the middle child of three boys. Hitler was winning in ’41, but Rose and Jack brought home a child to their new brick house in Kew Gardens Hills. Halfway between Jamaica and Forest Hills high schools, the houses were semi-attached with driveways between and garages in back, next to 10′ x 30′ grass yards. Punch ball was king. Twelve of us boys played in the street. “Car,” someone called to constantly punctuate our games. My big brother Jules, Ira Landess, Bobby, Dicky Schwartz, Joel Gladstone, Michael Davidson, Henry Heitner — we played running bases, red light-green light, giant steps, hide-and-seek, two-hands touch football. I was down the manhole, into the sewer, many times, retrieving the Spaldeen. We flipped baseball cards, rode our bikes (stood on the handlebars). We caught fireflies, Japanese bottles, washed above the wrists for dinner — we called it supper — played chess by day and watched the Brooklyn Dodgers at night on TV, all on our screened-in porches. Night games were new; the Dodgers played under the lights, in white satin. Duke Snider looked good. But Stan Musial was the quiet king to me.