WHAT: THE ORENDA, a novel

WHERE: Set in 17th-century in what is now Ontario.

“Mesmerizing.
“A noteworthy literary achievement, Boyden’s third novel sits at the confluence of three civilizations in seventeenth-century Ontario. The narration alternates among Bird, a Wendat (Huron) warrior; Snow Falls, the young Iroquois captive he adopts after killing her family to avenge his wife and daughters; and Père Christophe, a thoughtfully intelligent, multilingual Jesuit missionary. Over some years, as the growing French presence in the New World upsets a fragile balance and threats from the Iroquois become urgent, the French and Wendat move toward alliance, which, tragically, increases the latter’s susceptibility to European diseases.
“In this deeply researched work, Boyden captures his characters’ disparate beliefs, remaining impartial even as they pass judgment on the customs they find simultaneously fascinating and repellent in the others. The prose conveys a raw beauty in its depictions of trade journeys, daily life within longhouses, and spirituality; the Huron Feast of the Dead, for example, is presented as a majestic symphony of reverence. The novel offers many intense impressions of cross-cultural conflicts and differences, yet it is most affecting when evoking its protagonists’ shared humanity and the life force—the “orenda”—burning brightly within each of them.”
—Sarah Johnson, in a starred review for BOOKLIST

“Dignified and penetrating.
This work offers themes of clashing cultures and religions that resonate in today’s world.” —James Coan, in a starred review for LIBRARY JOURNAL 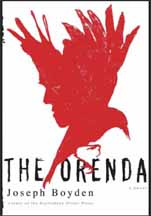 From the beginning of the book: I awake. A few minutes, maybe, of troubled sleep. My teeth chatter so violently I can taste I’ve bitten my swollen tongue. Spitting red into the snow, I try to rise but my body’s seized. The oldest Huron, their leader, who kept us walking all night around the big lake rather than across it because of some ridiculous dream, stands above me with a thorn club. The weight these men give their dreams will be the end of them.