WHAT: THE CIRCLE, a novel

WHY: “A stunning work.
A cautionary tale of subversive power in the digital age suavely packaged as a Silicon Valley social satire…Eggers presents a Swiftian scenario absurd in its logic and compelling in its motives.” —PUBLISHERS WEEKLY, starred

“Ambitious, terrifying, and eerily plausible.
Eggers brilliantly depicts the Internet binges, torrents of information, and endless loops of feedback that increasingly characterize modern life. But perhaps most chilling of all is his notion that our ultimate undoing could be something so petty as our desperate desire for affirmation. Brave and important and will draw comparisons to Brave New World and 1984.” —Keir Graff, in a starred review for BOOKLIST

“Creepy, chilling, and anguishing.
An arresting indictment of our overwired world. Eggers slyly presents a heroine we easily identify with, then lets her buy numbingly into the message of her new employer: ‘All that happens must be known.’
“Astonishingly powerful and boasting up-to-the-next-minute headquarters on a pristine West Coast campus buzzing with activities, The Circle controls on average 90 percent of search, freemail, and text-servicing markets through a product called TruYou, which takes each customer’s social media profiles, payment systems, and multiplying passwords and puts them in one account. But as Mae Holland discovers when she is hired, employees are expected to participate relentlessly in on-campus activities and to 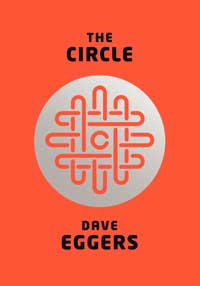 communicate with the world minute by minute. At her first Circle event, she meets the strange, shadowy Kalden, who tries to warn her about the Circle’s increasingly authoritarian behavior, but she’s sucked into the vortex as social media passes over scarily to social control.
“This new work by Eggers gives us Big Brother circa 2020. Every time the narrative starts feeling overstated, some detail registers as too authentic, too like today’s world, to ignore. Would that this headlines-relevant work were only social satire; no wonder Edward Snowden was alarmed.”
—Barbara Hoffert,
in a starred review for LIBRARY JOURNAL

Tags: A Heartbreaking Work of Staggering Genius, A Hologram for the King, Circle, Dave Eggers, Fiction, Knopf, McSweeney's, The Circle
Posted in Media Center, Not on Homepage | No Comments »