Media Center: ‘Empire on the Edge’ by Nick Bunker

WHAT: AN EMPIRE ON THE EDGE:
How Britain Came to Fight America

WHERE: Set in England and Colonial America.

WHY: “An eye-opening study of the British view of the American Revolution and why they were crazy to fight it.
“England never had a solid plan for administering the American colonies, situated on a continent they couldn’t understand and could never hope to rule. Their existence was purely economic, a market for English goods and an exclusive supplier of tobacco, rice, timber, fur, rum, sugar and other important exports.
“Those who governed for England sent few, if any, reports, and those were incomplete and/or about the coming trouble. Thomas Gage, the commander in chief of the British Army in America, was responsible for territory from Nova Scotia to the Bahamas, in addition to the western bases, from Quebec to Alabama, that Britain gained after the Seven Years’ War. On the other hand, King George III’s influence was limited. Things might have carried on as usual except for the 1772 banking crash and resulting recession. Speculation, greed, extortion and fraud brought the East India Company to its knees, deep in debt with a mountain of tea losing value to a worldwide smuggling trade.
“The author lists countless mistakes, misunderstandings and plain stupidity, all of which led to revolution. The ultimate cause of the revolt was Britain’s staunch belief in the twin pillars of the British constitution: parliamentary sovereignty and the rule of law in a government built on land ownership. Colonists had no rights, and only landowners could attend town meetings. Questions of taxation, religious freedom and the bailout of the East India Company were really just flash points, and the failure of British leadership to recognize the warning signs will astonish readers who thought the Revolution was just about tea.
“A scholarly yet page-turning, superbly written history.” —KIRKUS, a starred review

“Riveting. With a sharp eye for economic realities,
Bunker persuasively demonstrates why the American Revolution had to happen.”
—PUBLISHERS WEEKLY, a featured review

“Recommended to historians of all kinds, professional and amateur alike.”
—Mark Spencer, in a starred review for LIBRARY JOURNAL. 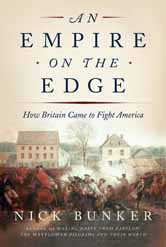 From the beginning of the book: The British involvement in the far west had begun in 1763, by the stroke of a pen at a conference in Paris. A treaty negotiated at the Louvre put an end to the Seven Years’ War, a conflict fought out on three continents between France, Spain, and Austria on the one hand, and Great Britain and its Prussian ally on the other. In exchange for peace the French king Louis XV ceded away a string of islands in the Caribbean and all his possessions on the frontier from Quebec to Alabama. Suddenly the British acquired a vast new domain beyond the Appalachians: a territory so immense that two more years passed before they could hoist their colors above every post the French had surrendered.