WHAT: DEPT. OF SPECULATION, a novel

WHY: “A magnetic novel about a marriage of giddy bliss and stratospheric anxiety, bedrock alliance and wrenching tectonic shifts.
“Offill covers this shifting terrain and its stormy weather in an exquisitely fine-tuned, journal-like account narrated by ‘the wife,’ an ironic self-designation rooted in her growing fears about her marital state. She is smart if a bit drifty, imaginative and selectively observant, and so precisely articulate that her perfect, simple sentences vibrate like violin strings.
“And she is mordantly funny, a wry taxonomist of emotions and relationships. Her dispatches from the fog of new motherhood are hilarious and subversive. Her cynical pursuit of self-improvement is painfully accurate. Her Richter-scale analysis of the aftershocks of infidelity is gripping.
“Nothing depicted in this portrait of a family in quiet disarray is unfamiliar in life or in literature, and that is the artistic magic of Offill’s stunning performance. She has sliced life thin enough for a microscope slide and magnified it until it fills the mind’s eye and the heart.” —Donna Seaman, BOOKLIST

“Clever, subtle, and rife with stokes of beauty…but it’s Offill’s language and eye for detail that make this a must-read. Popping prose and touching vignettes of marriage and motherhood.” —PUBLISHERS WEEKLY, a starred review 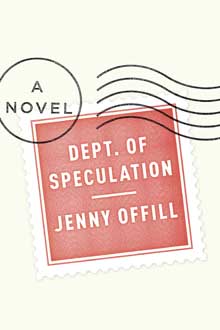 First line of the book: Antelopes have 10X vision, you said. It was the beginning or close to it. That means that on a clear night they can see the rings of Saturn.