WHAT: THE PAINTER, a novel

WHERE: Set in Colorado and New Mexico.

WHY: “A masterful novel in which love, artistic vision, guilt, grief, and spine-chilling danger propel a suspenseful plot.
“Jim Stegner — celebrated painter, ardent fisherman and homespun philosopher — is a gentle, introspective man who reads and quotes poetry, feels at one with nature, and has full-hearted empathy with animals. But every now and then, if provocation occurs, rage swells up in him and destroys any restraint.
“When the novel opens, Jim has already served prison time for beating a man who leered at his teenage daughter. Now his daughter is dead, murdered at age 15, and Jim feels bitter guilt and endless remorse for the girl’s death. After the tragedy, Jim’s wife left him. He has retreated to a little house in a Colorado valley where he is painting with new urgency, beginning an affair with his young model, and conquering his alcohol and gambling addictions. When he comes upon a man brutally beating a horse, however, Jim’s rage rises again.
“Heller is equally skillful at describing the creation of a painting as he is at describing the thrilling details of a gunfight. Here, he explores the mysteries of the human heart and creates an indelible portrait of a man searching for peace, while seeking to maintain his humanity in the face of violence and injustice.”
—Sybil Steinberg, in a featured, starred review for PUBLISHERS WEEKLY

“An ever-escalating, ravishing, grandly engrossing and satisfying tale of righteousness and revenge, artistic fervor and moral ambiguity. Heller’s writing is sure-footed and rip-roaring, star-bright and laced with dark yearning.” —Donna Seaman, in a starred review for BOOKLIST 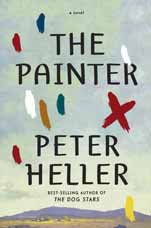 From the beginning of the book: I never imagined I would shoot a man. Or be a father. Or live so far from the sea. As a child, you imagine your life sometimes, how it will be. I never thought I would be a painter. That I might make a world and walk into it and forget myself. That art would be something I would not have any way of not doing.