WHAT: THE EFFICIENCY PARADOX:
What Big Data Can’t Do

WHY: “An insightful study of the effects
of information technology on society.
“Tenner argues that supposed advances in technological efficiency can actually be self-subverting in this reasoned antidote to a culture increasingly obsessed with doing more with less. He starts by examining the history of innovations premised on efficiency, first seen in continuous production models such as Ford’s assembly line, and more recently in the rise of digital platform companies, which are ‘based less on the organization of machines and human labor than the gathering, analysis, and exchange of data.’
“The book then segues into hot topics such as rideshare apps, GPS, and self-driving cars. Tenner demonstrates how systems such as these, which are premised on efficiency, reduce serendipity, stifle learning, and limit humans’ ability to respond when malfunction occurs; they also, he argues, create substantial lost opportunity cost in the long term. Tenner also addresses the fallacies of big data and how random initial advantages from algorithms (such as Google’s PageRank, which attempts to deliver information that people want rather than what they asked for) can hide the long-term codification of systemic bias.
“Tenner is no luddite; he evaluates the positives and negatives of technology through a strong base of evidence rather than nostalgia or personal anecdote, and debunks some of the most popular concerns about automation. This insightful study of the effects of information technology on society warrants close attention” –PUBLISHERS WEEKLY

“A bite on the data-driven hand that feeds the system.
“As Tenner ranges among case studies from Uber to e-books and platform revolutions, he is a clear champion not of the robot but of the human mind behind its creation, a mind far richer than any algorithm—for the time being, at least.” –KIRKUS REVIEWS

This book is a critique of something self-evidently desirable, even wonderful, until it isn’t: efficiency. And it’s also about an apparent oxymoron that seems absurd until we realize that it’s also been essential: inspired inefficiency. Efficiency is mostly good but, like all good things, can be carried too far; even an excess of water can be lethal.

THE MANAGED BODY
Why We Are Still Waiting for Robodoc

INSPIRED INEFFICIENCY
How to Balance Algorithm and Intuition 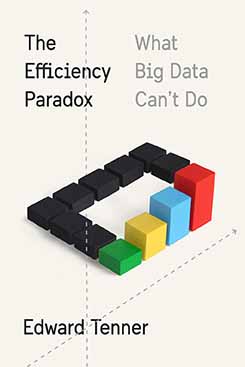