Posts Tagged ‘Everything Explained That Is Explainable’

Media Center: ‘Everything Explained That Is Explainable’ by Denis Boyles

WHAT: EVERYTHING EXPLAINED
THAT IS EXPLAINABLE:
On the Creation of the Encyclopaedia Britannica’s Celebrated Eleventh Edition, 1910-1911

WHERE: The author lives in France.

WHY: “A well-researched, brightly told history
of the men and women who saved a great compendium of knowledge.
“In the 1890s, the Encyclopedia Britannica, then in its Ninth Edition, and the prestigious Times of London both were losing money. Critic and editor Boyles focuses on a pair of audacious American bookmen, Horace Everett Hooper and Henry Haxton, who hatched a plan to revive the fortunes of both eminent publications.
“They would use the newspaper to sell the encyclopedia by barraging readers with ‘bombastic, full-page and direct-mail marketing,’ a form of advertising that the staid Times had never seen. For Hooper, promoting the encyclopedia was more than a way to make money: an idealist and anglophile, he saw the encyclopedia as ‘a tool for making the world a better, more civilized place by supporting his romantic vision of an English-speaking elite.’ He aimed, he said, ‘to make the Britannica self-sustaining and give it to Britain as a national trust.’
“By the time the two men launched their plan, it was clear that the Ninth Edition was quickly becoming outdated. Scientific, technological, social, and political changes mandated new material, so they decided to produce supplemental volumes, hiring as editor respected journalist Hugh Chisholm, ‘a man of the world as well as a scholar.’ Throughout his tenure, the heroic Chisholm served as ballast to ground Hooper’s wild enthusiasms.
“Boyles traces the evolution of the Britannica and the fate of the Times through lawsuits, battles for ownership, and ongoing money woes involving colorful, earnest, sometimes eccentric characters. It all culminated in the majestic 11th Edition: 40,000 long, erudite, yet accessible articles written by a huge number of renowned contributors.
“How grit and determination created an encyclopedia for the modern world.”
–KIRKUS REVIEWS

From the beginning of the book:
HOGARTH, JANET ELIZABETH (1865-1954), Oxford-educated British editor and writer, first female employee of the Bank of England, former librarian of the Times Book Club, member of the executive board of the Women’s National Suffrage League, and the only female senior editor of the Encyclopaedia Britannica, stepped under the huge canopy covering the magnificent Savoy Hotel’s Embankment entrance, went up to the foyer and into the formal banquet hall, and quickly greeted a small collection of colleagues. You couldn’t have known by looking at her — she was a tall, big-boned, middle-aged apparently confident Victorian professional woman in a serious gown, except for that sweetheart neckline and the lace insert — but she was very anxious. In fact, she admitted later, “I was never so frightened in my life.” It was the night of December 13, 1910. The occasion was a banquet to celebrate the work of the “women contributors” to the soon-to-be-published Eleventh Edition of the Encyclopaedia Britannica, an enterprise so heavily and persistently publicized that the appearance of a new edition alone seemed to be the appropriate climax to a climactic decade, the first of the twentieth century.” 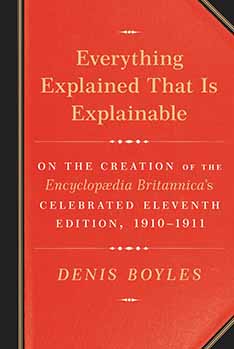