WHAT: CUSTER’S TRIALS:
A Life of the Frontier of a New America

WHY: “A spectacular narrative.
“Stiles, winner of a National Book Award and a Pulitzer Prize for 2009’s The First Tycoon, grounds this spectacular narrative of George Armstrong Custer in skillful research to deliver a satisfying portrait of a complex, controversial military man.
“The biography centers on the importance of period context in understanding character, incisively showing that Custer lived uncomfortably on a ‘chronological frontier’ of great modern change in the U.S. Though Custer is best known for his fatal ‘last stand’ at the 1876 Battle of the Little Bighorn, Stiles recounts how the officer first attracted national attention for his cavalry exploits during the Civil War. Stiles also delves into the role of celebrity in Custer’s life, tracing the ebb and flow of his popularity over more than a decade after the war, as Custer struggled to find a prominent place in the ‘peacetime’ army that the U.S. deployed in the West against Native Americans. Custer’s personal life was tumultuous: he was a womanizer before and during his marriage to Libbie Bacon, and their home life was complicated by the presence of a freed bondswoman as well as persistent rumors that he had taken a captive Cheyenne woman as his ‘mistress.’
“Confidently presenting Custer in all his contradictions, Stiles examines the times to make sense of the man—and uses the man to shed light on the times.” —PUBLISHERS WEEKLY, a starred review

“This powerful, provocative biography…
successfully illuminates the lives of Custer and his family as part of the changing pattern of American society.” —Nathan Bender, LIBRARY JOURNAL

“A warts and all portrait…
giving full rein to both Custer’s admirers and critics…Stiles digs deep to deliver genuine insight into a man who never adapted to modernity.” —KIRKUS REVIEWS 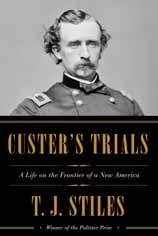 Media Resources:
About the book and author | Read an excerpt | Author tour | Download the jacket | Download the author photo | Listen to the AudioBook