WHAT: GOD SAVE TEXAS:
A Journey into the Soul of the Lone Star State

WHY: “Thoughtful, engrossing,
and often amusing.
“Wright is a staff writer for the New Yorker, a Pulitzer Prize–winning author, and a longtime resident of Texas. It is a state whose history, politics, and culture Wright finds endearing, repelling, and puzzling, all dependent upon which aspect he is exploring and describing.
“Wright uses history, politics, and a series of vignettes to reveal a great deal about a state that may soon surpass California in population and economic dynamism. He shows how the activities of several intrepid and ruthless entrepreneurs fostered Texas’ modern oil-based economy. He touches on the heritage of the ‘cowboy culture,’ as seen through Charles Goodnight, who inspired Larry McMurtry’s novel Lonesome Dove. And he provides an affectionate yet critical portrait of Lyndon Johnson.
“As a Texan, Wright despises the condescension and snobbery directed at his state, but he finds the casual bigotry and ignorance of many Texans infuriating. He recalls the bipartisanship that once characterized politics in contrast to the current domination by Republican ideologues.
“This is an important book about a state and people who will continue to have a large impact on the U.S.” –Jay Freeman, in a starred review for BOOKLIST

“A revelation.
Wright finds the reflection of his own conflicted soul in the native state he loves and has hated.” –KIRKUS, a starred review

“A masterful service of revealing both the warts and the beauty of Texas’ big state of mind.” –Jacob Sherman, in a starred review for LIBRARY JOURNAL

Subtle was the word my friend Steve used as we drove through a spongy drizzle from Austin to San Antonio on a mild February morning. He was referencing the quality of the pleasures one might experience from observing the Texas landscape — small ones, requiring discernment — although the actual vista in front of us was an unending strip mall hugging a crowded interstate highway. Subtlety is a quality rarely invoked for anything to do with Texas, so I chewed on that notion for a bit. 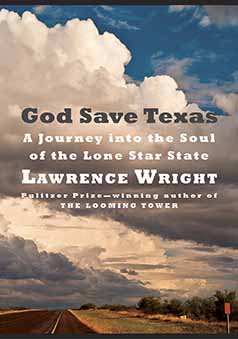