Media Center: ‘Burning Down the House’ by Jane Mendelsohn

WHAT: BURNING DOWN THE HOUSE,
a novel

WHY: “Oracular, dazzling, and shocking.
“In her dramatic fourth novel, an incendiary saga about the Zanes, a grandly wealthy New York family, Mendelsohn revels in surging, hallucinogenic, even baroque language as she conveys the full extent of their flagrant privilege, ‘supernatural decadence, and hidden misery.
“A close family friend is directing a Broadway musical that combines Talking Heads hits with Jane Eyre, a tale Mendelsohn loosely aligns with the relationship between the Zane patriarch, Steve, an imposing, ‘ferociously intelligent’ international mogul, and Neva, the new nanny. Having survived the horror of being taken from her home in the Caucasus and enslaved as a sex worker, Neva, self-possessed, observant, and tough, becomes Steve’s most trusted ally, arousing the fury of his morally bankrupt oldest son.
“The most vulnerable of the Zanes is high-school senior Poppy. Raised as a daughter, she is actually Steve’s niece, her mother dead, her father a mystery. Disaffected, pill-popping, and offhandedly neglected, Poppy compares her family to ‘the House of Agamemnon,’ another clue to the impending conflagration.
“With gorgeous, feverishly imaginative descriptions of her tormented characters’ psyches, and settings ranging from Manhattan to Istanbul to Laos, Mendelsohn, oracular, dazzling, and shocking, creates a maelstrom of tragic failings and crimes, exposing the global reach of the violent sex trafficking underworld, and excoriating those among the ‘planetary elite’ who allow it to metastasize.”
—Donna Seaman, in a starred review for BOOKLIST 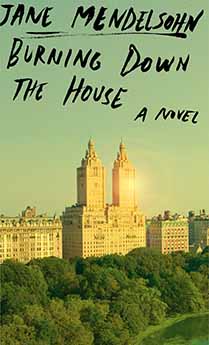 From the beginning of the book: They always celebrated important family events out of town, usually in another country. Here they were in a black car as it sped along the highway, now turning onto a side road, disappearing and emerging from under trees like a blinking light on a Global Positioning System screen moving across a continent. The tinted windows flickering with shadows and reflections, sparks dancing against the glass. From the outside, the family riding in the car was difficult to understand, the way the movements of a fire, even when viewed within the safe confines of a fireplace, seem random and uncontrolled. However, inside, from amid the licking flames of its interlocking relationships, the Zane family made its own fantastical sense. All families are complicated, but because their connections constitute the primary reality that its members know, some families create a world that to them is more comprehensible than the world itself.

Tags: Burning Down the House, Fiction, I Was Amelia Earhart, Jane Mendelssohn, Knopf
Posted in Media Center, Not on Homepage | No Comments »