‘Nothing Is Lost’ by Ingrid Sischy

WHAT: NOTHING IS LOST: Selected Essays.
Foreword by Laurie Anderson

WHERE: The author lived in New York
until her death in 2015.

WHY: This is a treasure.
“South African–born Ingrid Sischy’s (1952–2015) passion for art, fashion, photography, controversy, and the synergy of New York City propelled her high-profile career. In 1980, she began an eight-year run as editor-in-chief for Artforum, after which she took the helm of Interview from 1989 to 2008, then served as consulting and contributing editor, respectively, for the New Yorker and Vanity Fair.
“In her sparkling foreword to this generous, career-spanning, chronologically ordered collection of Sischy’s stellar profiles and essays, multitalented artist and composer Laurie Anderson, a close friend, brings Sischy into focus as an irrepressible, truth-seeking, socially conscious, empathic, witty, mischievous, and zestful individual who loved life.
“Sischy’s essays are vigorous and delectable, ranging from a vital portrait of artist Keith Haring to reflections on how Bruce Weber’s South Africa photographs unlocked long-cached childhood memories to illuminations of Miuccia Prada, Robert Mapplethorpe, Jeff Koons, James Rosenquist, Calvin Klein, Francesco Clemente, Nicole Kidman, and many more. For Sischy admirers, this is a treasure; for everyone interested in art journalism at its crisp, inquisitive, and resonant best, this is gospel.”
—Donna Seaman, BOOKLIST 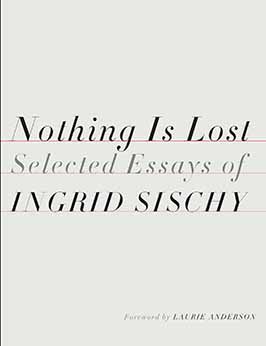