WHAT: TIGERMAN, a novel

WHERE: Set on a fictitious Asian island.

WHY: “Yet another bravura performance from a writer whose imagination knows no bounds.
“Nick Harkaway is at it again, celebrating pop culture, mixing genres like a mad scientist, and producing a book that is both profoundly moving and deliriously entertaining. This time his canvas is not nearly as broad as it was in Angelmaker, with the action limited to one moment in time and one confined place. But what a place!
“Mancreu is a tiny Asian island on the brink of extinction. Polluted beyond salvation, with noxious gases belching from its core, Mancreu is scheduled to be evacuated, then obliterated. Meanwhile, lawlessness reigns, with a motley crew of British, French, American, and Japanese officials looking on aimlessly as the island is overcome with “the deep, dark brown taste of gloom.” The British representative, Lester Ferris, a former soldier put out to pasture in Mancreu, is told only not to make waves. That’s fine with Lester until he befriends a mysterious island boy, a lover of comics and a whiz on the Internet. When Lester’s and the boy’s friend, a café owner, is murdered in front of their eyes, the boy wants revenge and expects Lester to step up.
“If Harkaway’s debut, The Gone-Away World, was his take on postapocalyptic fiction, and Angelmaker a kind of Dickens-meets-steampunk epic, then this novel is an ode to superhero comics. To please the boy, whom he calls Robin, Lester dons a self-styled superhero costume, complete with some twenty-first-century weaponry, and sets off as Tigerman to right a wrong world, hoping to show Robin that ‘sometimes someone does fix it.’ Mancreu can’t be fixed, of course, and it is at this point that Harkaway throws a spanner in the comic-book works, adding depth and complexity to the mix, more Haruki Murakami than Stan Lee.
“While Tigerman romps, Harkaway slips in a moving (surrogate) father-son drama, but nothing is quite what it seems.” —Bill Ott, in a starred review for BOOKLIST

“A hoot and a half, and then some.
Hands down, the best island farce since Kurt Vonnegut’s Cat’s Cradle half a century ago… A brilliantly imagined romp.” —KIRKUS, a starred review

“A poignant morality tale, equally fueled by emotion and adrenaline.
Harkaway adroitly explores the lengths one man will go to save what he’s come to love, even in the face of almost-certain failure.” —PUBLISHERS WEEKLY, a featured starred review 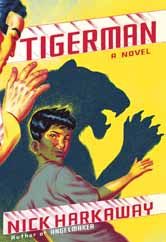 From the beginning of the book: On the steps of the old mission house, the sergeant sat with the boy who called himself Robin, and watched a pigeon being swallowed by a pelican. The whole business had come as a surprise to everyone involved, not least of all it seemed to the pelican herself, who had engaged in the attempt almost absently and now appeared to be wishing it was over and done. She was by nature a placid bird, slow to take wing and hard to rile, but the pigeon had been presuming on her good nature for several months now, scooting between her and the pieces of bread that people tossed in her direction as they wandered by, fluttering down to snatch treats of fish almost from her beak.