Media Center: ‘In Other Words’ by Jhumpa Lahiri

WHAT: IN OTHER WORDS

WHY: “A captivating and insightful lesson
in the power of language.
“Readers who have followed Pulitzer-winner Lahiri’s stellar career might be surprised to discover that she has written her latest book in Italian. In this slim, lyrical nonfiction debut, Lahiri traces the progress of her love affair with the Italian language and the steps that caused her to move to Italy and stop reading and writing in English.
“Unlike Samuel Beckett and Vladimir Nabokov, who also wrote in adopted languages, Lahiri doesn’t leap directly into fiction. Though the book contains a short story, ‘The Exchange,’ Lahiri’s first order of business is to tell her own story. She writes exquisitely about her experiences with language: her first language was Bengali, but when her family moved to the United States, she made a difficult adjustment to using English at nursery school.
“Now, she reports, her literary life in English seems distant and unmoored from her self. By embracing the increased difficulty of writing in a new language, Lahiri has forced herself to write in short, syntactically simple sentences. For admirers of her previous work, it will feel strange but pleasant to read her writing in translation.”
—PUBLISHERS WEEKLY

“A richly meditative, revealing, and involving ‘linguistic autobiography’ about language and the self, creativity, risk, and metamorphosis.”
—Donna Seaman, in a starred review for BOOKLIST

“An honest, self-deprecating, and very moving account of a writer searching for herself in words.” —KIRKUS, a starred review 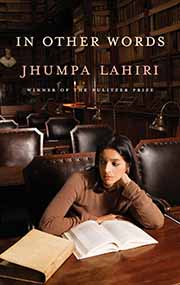 From the beginning of the book: I want to cross a small lake. It really is small, and yet the other shore seems too far away, beyond my abilities. I’m aware that the lake is very deep in the middle, and even though I know how to swim I’m afraid of being alone in the water, without any support…

Translated from the Italian by Ann Goldstein.

Tags: In Other Words, Jhumpa Lahiri, Knopf, Lahiri memoir, Lahiri nonfiction
Posted in Media Center, Not on Homepage | No Comments »