WHAT: THE SEA AND CIVILIZATION:
A Maritime History of the World

WHERE: Oceans, rivers, lakes, and streams.

WHY: “An invaluable resource
for salty dogs and land-lubbers alike.
“Even though the Earth’s surface is 70% water, historical narratives are usually land-centered. Paine shifts emphasis from land to water in order to correct this imbalance, an approach that takes the reader through history via the seas. He devises a chronological spiral around the world, starting with a recounting of ancient times, before covering the same areas in medieval times, and so on up to the modern era.
“Paine’s highly detailed work encompasses a wide array of topics, from trade and the influence of the sea on warfare and political coalitions, to ship building techniques through the ages, to piracy and slavery. Of particular interest are the intricate alliances and shifting loyalties of ancient Mediterranean cultures, the outsized role of the relatively tiny Spice Islands, the impact the Vikings had on cultural exchange across coastal Europe, and the influence of religion on areas as diverse as trade and maritime law.
“Readers expecting a naval history will receive much more: a thorough history of the people, the ports, and the cultural activity taking place on the water.”
—PUBLISHERS WEEKLY, starred review 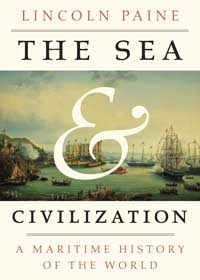 “A lucid, well-written survey that covers a lot of ground…well, fathoms.” —KIRKUS REVIEWS

Media Resources:
About the book | About the author | Author Q&A | Read and excerpt | Download the jacket or the author photo