WHAT: THE LOWLAND, a novel

WHERE: Set in India and the U.S.

WHY:
“Spellbinding…an absolute triumph.
“The clever Mitra brothers are inseparable even though Subhash is serious, cautious, and reliable, while Udayan is brash, impassioned, and rebellious. Both excel in their studies even though, thanks to Udayan, they get into mischief in their quiet, middle-class Calcutta enclave with its two adjacent pools and water hyacinth-laced lowland, a gorgeously rendered landscape Lahiri uses to profound effect.
“In college, Subhash studies chemistry, Udayan physics, but while Subhash prepares to go to America to earn his PhD, Udayan experiences a life-altering political awakening. It’s the late 1960s, a time of international protest, and Udayan joins the Mao-inspired Naxalite movement, which demands justice for the poor. He also secretly marries self-reliant, scholarly Gauri. Subhash’s indoctrination into American life and Rhode Island’s seasons and seashore is bracing and mind-expanding, while Udayan’s descent into the Naxalite underground puts him in grave danger. As shocking complexities, tragedies, and revelations multiply over the years, Lahiri astutely examines the psychological nuances of conviction, guilt, grief, marriage, and parenthood and delicately but firmly dissects the moral conundrums inherent in violent revolution.
“Renowned for her exquisite prose and penetrating insights, Lahiri attains new heights of artistry—flawless transparency, immersive intimacy with characters and place—in her spellbinding fourth book and second novel, a magnificent, universal, and indelible work of literature.
“Lahiri’s standing increases with each book, and this is her most compelling yet.”
—Donna Seaman, in a starred review for BOOKLIST 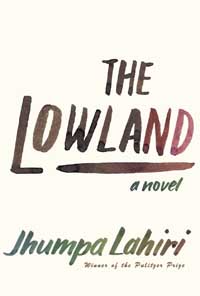 “A formidable and beautiful book. Lahiri’s skill is reflected not only in her restrained and lyric prose, but also in her moving forward chronological time while simultaneously unfolding memory, which does not fade in spite of the years.”
—PUBLISHERS WEEKLY, featured review

“A tale of two continents in a era of political tumult, rendered with devastating depth and clarity.” —KIRKUS, starred review

“An extraordinary story. One of this year’s most anticipated books. Banal words of praise simply won’t do justice; perhaps what is needed is a three-word directive: just read it.”
—Terry Hong, in a starred review for LIBRARY JOURNAL