WHAT: GANDHI BEFORE INDIA,
a new biography by Ramachandra Guhu

WHERE: Covers his years in India, England, and South Africa.

WHY: “An essential work, for its bold purpose,
extensive research, and engaging prose.
“Seeking to address scholarly reliance on the Mahatma’s own writings, Guha looks to a broader range of primary sources, including both Gandhi’s allies and detractors, to explore his ‘less known and sometimes forgotten’ early career. We experience Mohandas Gandhi as he lived and evolved into an ‘authentically global’ prophet of peace, engaged in a process of ‘dialogue and reconciliation’ with a conflicted world.
“Much of the book chronicles Gandhi’s rise to prominence in South Africa, where he arrived as a multilingual barrister capable of translating between the British and the Indian diaspora. This ability to bridge communities became a foundation for the ‘unique spirit of ecumenism’ that Gandhi developed into a passive resistance philosophy supported by both Eastern and Western precedents. His religious journey was paramount, as he grew beyond the orthodox Hinduism and dietary restrictions of his caste by incorporating perspectives from the Christians, Muslims, Jews, and vegetarians he befriended throughout his career.
“Through this excellent volume, Guha demonstrates his deep affinity for the Mahatma with an honest examination of his personal development.”
—PUBLISHERS WEEKLY, a starred review

“An outstanding opening of a planned two-volume biography of one of
the most widely revered but often misunderstood figures in world history.” —Jay Freeman, in a starred review for BOOKLIST

“This biography of Gandhi by a seasoned Indian scholar
distinguishes itself from legions of other by its clarity and many facets.”
—KIRKUS REVIEWS

From the beginning of the book: Gandhi’s caste, the Banias, occupied an ambiguous place in the Hindu social hierarchy…The Bania was a survivor, adept and adaptable, possessing the skills and instincts to see him through periods of adversity and political instability. The Banias of Gujarat, writes their modern historian, were “renowned for their smooth tongue.” They cultivated “a soft and persuasive way of speech” while extolling the quality of the goods they sold. “They would always try to avoid a confrontation with customers and clients, backing down when necessary.” The code of the caste stressed “hard work and frugal living”. Thus “Baniyas were taught never to be idle, and they had in consequence a reputation for being a restless people, irritated when there was no work at hand.” 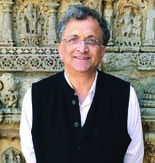