WHAT: MY TWENTIETH CENTURY EVENING AND OTHER SMALL BREAKTHROUGHS

WHY: An elegant, clothbound edition of the 2017 Nobel Lecture in Literature, delivered by the author at the Swedish Academy in Stockholm on December 7, 2017.

From the book:
So here I am, a man in my sixties, rubbing my eyes and trying to discern the outlines, out there in the mist, to this world I didn’t suspect even existed until yesterday. Can I, a tired author, from an intellectually tired generation, now find the energy to look at this unfamiliar place? Do I have something left that might help to provide perspective, to bring emotional layers to the arguments, fights and wars that will come as societies struggle to adjust to huge changes?

I’ll have to carry on and do the best I can. Because I still believe that literature is important, and will be particularly so as we cross this difficult terrain. But I’ll be looking to the writers from the younger generations to inspire and lead us. This is their era, and they will have the knowledge and instinct about it that I will lack. In the worlds of books, cinema, TV and theatre I see today adventurous, exciting talents: women and men in their forties, thirties and twenties. So I am optimistic. Why shouldn’t I be? 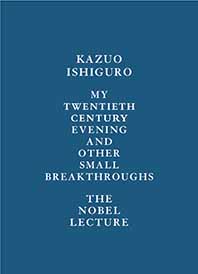