Media Center: ‘I Am I Am I Am’ by Maggie O’Farrell

WHAT: I AM I AM I AM: Seventeen Brushes with Death

WHERE: The author was born in Northern Ireland, grew up in Wales and Scotland, and now lives in London.

WHY: “This is a memoiristic tour de force.
“Irish-born Maggie O’Farrell, the author of seven ensnaring novels, including This Must Be the Place, recounts events that seem more imagined than real in this gripping, episodic memoir.
“In 17 essays that jump back and forth in time, each titled with the name of an endangered body part, O’Farrell recounts, with peerlessly matter-of-fact lucidity, 17 nearly fatal events. She begins with ‘Neck (1990),’ in which, at 18, she is confronted by a dangerous man on a hiking path. In ‘Lungs (1988),’ she leaps, in the dark, off a harbor wall into the sea and nearly drowns. It is here that she seeds our curiosity by noting that a childhood illness resulted in neurological damage that initially landed her in a wheelchair and that continues to undermine her movement and balance. Yet cautious she’s never been.
“Her astounding ‘brushes with death’ chronicle continues with a barely averted plane crash, other near-drownings and terrifying encounters with violent men, participation in a circus act with a blindfolded knife-thrower, and a nearly fatal C-section. O’Farrell finally tells the full, harrowing, strangely beautiful story of her battle with encephalitis, only to then reveal her daughter’s severe immune disorder.
“O’Farrell’s intrepidness and determination are awe-inspiring, her experiences overwhelming, and her writing impeccable.”
–Donna Seaman, in a starred review for BOOKLIST

“Fascinating and thought-provoking…A stunning collection of vignettes about near-death experiences in her life.” –PUBLISHERS WEEKLY

“A striking and unexpected foray into near-death experiences.”
–KIRKUS REVIEWS

On the path ahead, stepping out from behind a boulder, a man appears. We are, he and I, on the far side of a dark tarn that lies hidden in the bowl-curved summit of this mountain. The sky is a milky blue above us; no vegetation grows this far up so it is just me and him, the stones and the still black water. He straddles the narrow track with both booted feet and he smiles.

I realise several things. That I passed him earlier, farther down the glen. We greeted each other, in the amiable yet brief manner of those on a country walk. That, on this remote stretch of path, there is no one near enough to hear me call. That he has been waiting for me: he has planned this whole thing, carefully, meticulously, and I have walked into his trap.

I see all this, in an instant. 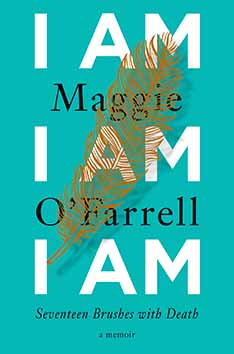