WHAT: ENDURANCE:
A Year in Space, a Lifetime of Discovery

WHY: “A great book…
we feel as though we’re right there with him.
“It’s no minor point that astronaut Scott Kelly chose as his book’s title the name of the ship Ernest Shackleton used for his expedition to cross the Antarctic almost exactly a century before Kelly climbed aboard the International Space Station, which he would call home for the next year.
“Like Shackleton, Kelly was proposing to do what no one had ever done before, and, like Shackleton, he had no idea what challenges were in store for him, both during his extended stay in space and back home on Earth. He tells his story in chapters that alternate between his life before the year in space (a born risk-taker, he was a poor student until he read Tom Wolfe’s The Right Stuff and discovered what he was meant to do with his life) and his life aboard the ISS.
“For space junkies, this is absolutely required reading. The narrative vividly captures Kelly’s growing excitement and trepidation as he prepares to spend a year living in an environment where the potential for catastrophe or death is a part of daily life, and once he’s aboard the space station, we feel as though we’re right there with him.”
–David Pitt, in a starred review for BOOKLIST

“Fascinating stuff.
A tale of aches and pains, of boredom punctuated by terror, and worries about what’s happening in the dark and back down on Earth.” –KIRKUS REVIEWS

“Filled with stories of daring, patience, and humanity.
While Kelly’s story is personal, it’s also a cautionary tale about the future of space exploration, especially if deeper investment is not made.”
–Beth Dalton, LIBRARY JOURNAL 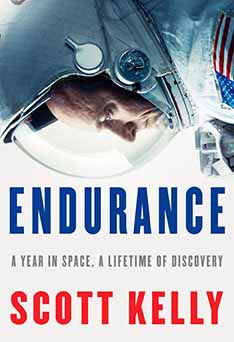 From the beginning of the book:
I’m sitting at the head of my dining room table at home in Houston, finishing dinner with my family: my longtime girlfriend, Amiko; my daughters, Samantha and Charlotte; my twin brother, Mark; his wife, Gabby; his daughter, Claudia; and our father, Richie. It’s a simple thing, sitting at a table and eating a meal with those you love, and many people do it every day without giving it much thought. For me, it’s something I’ve been dreaming of for almost a year. I contemplated what it would be like to eat this meal so many times, now that I’m nally here, it doesn’t seem entirely real. The faces of the people I love that I haven’t seen for so long, the chatter of many people talking together, the clink of silverware, the swish of wine in a glass — these are all unfamiliar. Even the sensation of gravity holding me in my chair feels strange, and every time I put a glass or fork down on the table there’s a part of my mind that is looking for a dot of Velcro or a strip of duct tape to hold it in place. I’ve been back on Earth for forty-eight hours.