Media Center: ‘Before the Wind’ by Jim Lynch

WHAT: BEFORE THE WIND, a novel

WHERE: The story is set in the Pacific Northwest.

WHY: “A cautionary tale of obsession and what it can cost.
“Through the first-person voice of middle son Josh and smooth tacking between the present and past, Lynch charts the shifting fortunes of the Johannssen family.
“Gramps, known as Grumps, and his son, Bobo Jr., design sailboats in the Pacific Northwest, where the son is a racing legend. His wife, a physics teacher, explains the science of wind and water to their three children, while he bullies them into mastering everything else from stem to stern. The eldest, Bernard, and Josh become accomplished sailors, but little sister Ruby is possessed of marine magic. When she inexplicably scuttles her chances for a spot in the Olympics, however, it’s clear there are cracks in the Johannssen crew.
“Ruby will abandon sailing for volunteer work on a hospital ship off Africa; Bernard heads out to sea solo… Josh remains close to home, working in a boatyard and living in a marina on one of his family’s designs. No longer a competitive sailor, he still keeps a mental log of the Johannssens’ past glories and recent struggles. Josh’s marina life and computer dates offer glimpses of an alternative family amid his father’s push to bring the clan together for one last race. Lynch dissects an uncommon family with more than one thing in common.” —KIRKUS, starred review

“Readers will be pulled along by the dry humor and genuine humanity of the narrative.” —Christine DeZelar-Tiedman, LIBRARY JOURNAL

“Lynch writes both humorously and movingly about one family’s lifelong love of sailing. For those who love a good sea story, this novel will be as bracing as salt spray during an autumn sail.” —PUBLISHERS WEEKLY 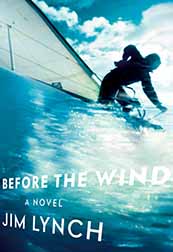