Media Center: ‘All the Truth Is Out’ by Matt Bai

WHAT: ALL THE TRUTH IS OUT:
The Week Politics Went Tabloid

WHY: “A new look at a scandal
that changed American politics.
Gary Hart once said that obsessive scrutiny of sex as an indicator of character would give America the politicians it deserved. In this probing narrative, Bai comes to another dismal conclusion: It would give America the new coverage it deserved–entertainment-driven, dominated by shallow pundits.” —KIRKUS REVIEWS

“This first-rate work of political journalism
will fan embers long thought to have gone out.
“Political columnist Bai makes a persuasive case for reexamining the career of presidential candidate Gary Hart, whose downfall in the wake of speculation about an extramarital affair, he argues, marks a turning point in the deterioration of American political journalism and democracy.
“Bai analyzes the forces coalescing around the scandal that brought down the Democratic frontrunner in May 1987, and captures those frenzied days in a masterfully written account. The possibility that a candidate might be lying about his sex life was not usually relevant, given the close relationship between major news outlets and politicians, but much had changed, especially given Watergate’s influence on a generation of reporters. By the time allegations of adultery met Hart’s campaign in New Hampshire, two previously separate streams, the tabloid press and political journalism, joined forces. The result has been ‘an unbridgeable divide… between our candidates and our media’ and an accompanying lack of substance and transparency in the political process.
“Based on extensive interviews with reporters and campaign insiders, including Hart and Donna Rice (the then 29-year-old model photographed sitting on his lap), Bai appraises Hart the politician, political visionary, and high-minded yet obstinately private man, and asks what the country might have lost with his foreshortened career.”
—PUBLISHERS WEEKLY, a starred review 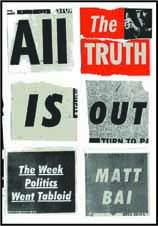 From the beginning of the book: To get to the tiny village of Kittredge, Colorado, which for five days in 1987 became the unlikely center of the political solar system, you have to take the interstate about ten miles west of Denver and then follow Bear Creek Avenue as it winds its way up the mountain. Your average navigation device will get you pretty close, but Gary Hart, despite having once been an evangelist for the digital age, doesn’t really believe in such wizardry, so he insisted I follow him from downtown. This was a clear July day in 2009, with the heat visibly baking the city sidewalk. He poked his head into my driver’s side window like a nervous father, genuine concern in his gray-blue eyes as he ran through the list of turns we would soon be taking and which I couldn’t possibly have remembered. Then he jumped into his red Ford Escape–a hybrid, of course,–and started toward the entrance to I-70.